Google Cloud Next London ‘19, the European variant of the Google Cloud Next conferences, has come to an end. As usual, Google announced a lot of exciting product innovations for Google Cloud Platform and G Suite at this flagship event in Europe. We were there, and are happy to recap the Google Cloud updates and new capabilities you shouldn’t miss in this article. Plus one really clear security message from Google to its Google Cloud customers in Europe! 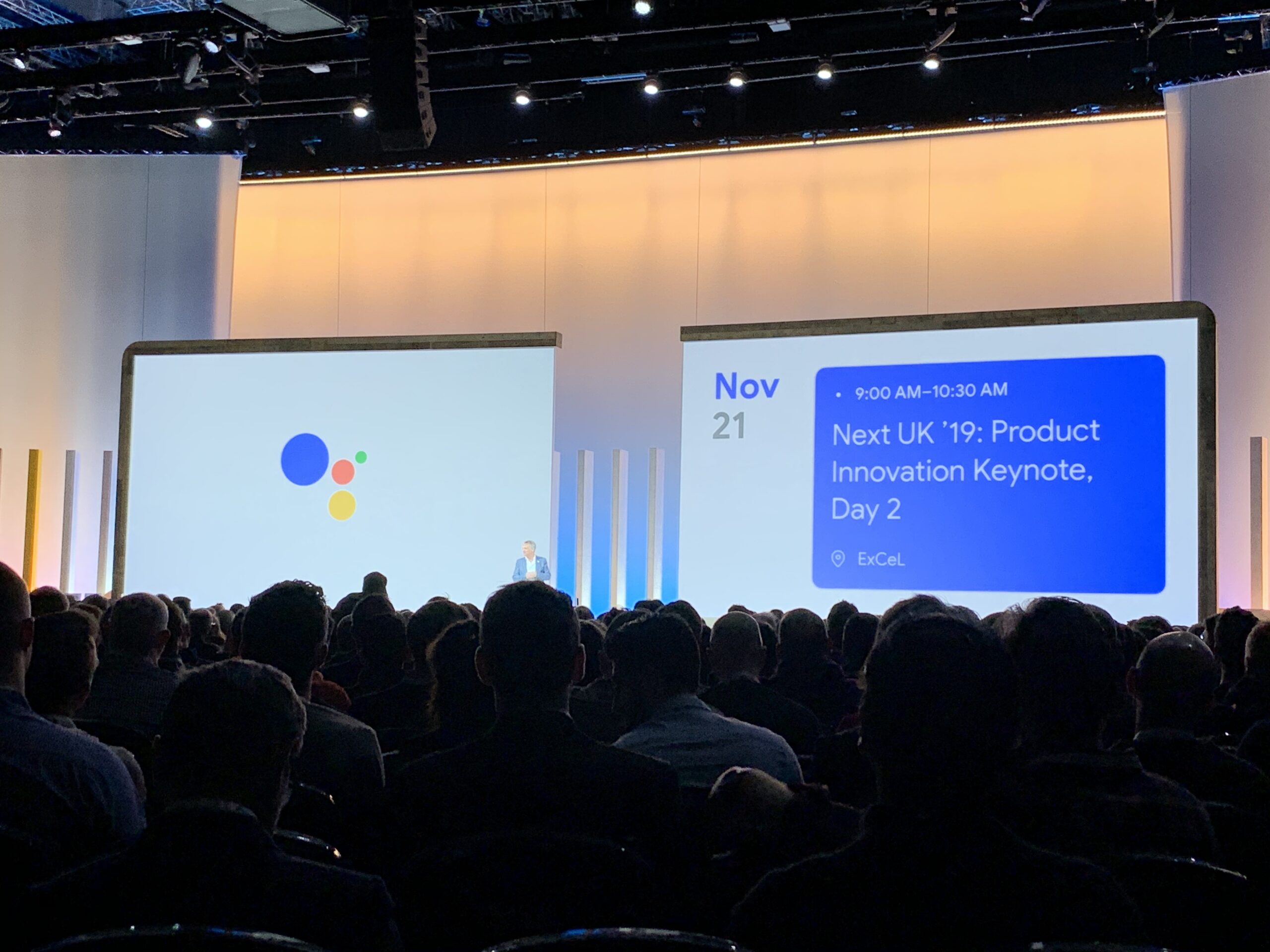 For the past 2 days, I attended the Google Cloud Next ‘19 conference in London. This sold out event at the heart of London brought more than 7000 people together and was filled with updates and announcements.

The main reason for me being there was to get inspired. We are doing quite a lot of innovative stuff with our customers, such as building hyper personalised customer experiences using data and machine learning at the Royal Belgian Football Association. My goal was to get out of my daily routine, challenge myself and take the necessary time to learn something new. My mission is to apply what I learn together with my team and help our customers in their journey to the Public Cloud.

After all, what’s the point of learning if you don’t share it with the world. That’s exactly what I’m going to do in this blog.

The rise of Public Cloud

The adoption of Public Cloud is reaching a whole new level, and the 3 big Cloud providers have intensified their offensive to grow their market share. Gartner is projecting an exponential growth of Cloud Services through 2022. More than 30% of the technology providers are already shifting from a Cloud-first to a Cloud-only investment in 2019. Really exciting stuff.

And at the same time a big opportunity for companies to focus on their core business rather than keeping the lights of their servers up and running. 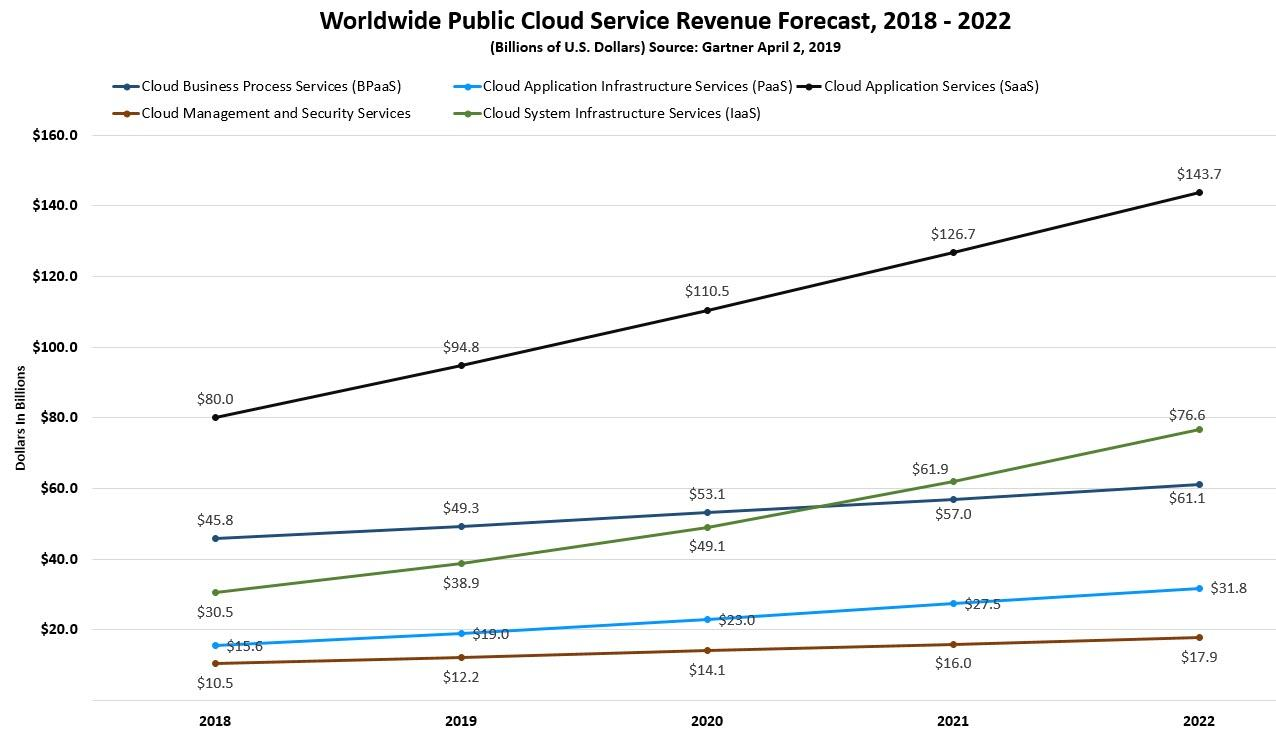 It should not come as a surprise that by now, Public Cloud has become mainstream within most organisations. The Cloud helps organisations to optimise their infrastructure and operations and enables them to transform both in business as well as in IT.

The move to the Public Cloud enables agility and reduces the time to market to serve customers’ ever changing demands faster and better than ever before.

A key message from Google Cloud to Europe: security first

Here’s one key message that combines everything that follows and is extremely important if you live and work in Europe: Google Cloud is truly designed to empower European organisations’ strict data security and privacy requirements and preferences.

Google Cloud’s data centres have seven European sites. Alongside Belgium, Finland and the Netherlands, there are also regions located in London, Frankfurt, Zurich and Warsaw.

Overview of the External Key Manager

You can read more details about all the security capabilities for Google Cloud and G Suite that Google announced in this blog post.

A few other updates worth knowing can be divided into these 5 categories: increasing interpretability with explainable AI, accelerating app modernisation, unlocking data insights; migrating, modernising and managing infrastructure and bringing more assistive features to the workplace.

Let’s take a closer look at each of them.

It’s no surprise that ML and AI are the most disruptive technologies nowadays. Companies are distinguishing themselves from the competition supercharging their applications using ML and AI.

As we progress a lot in this area, it’s very important for humans to understand how their machine learning models reach certain outcomes. At Next, Google announced Explainable AI that consists of a set of tools and frameworks to help developers in this journey. 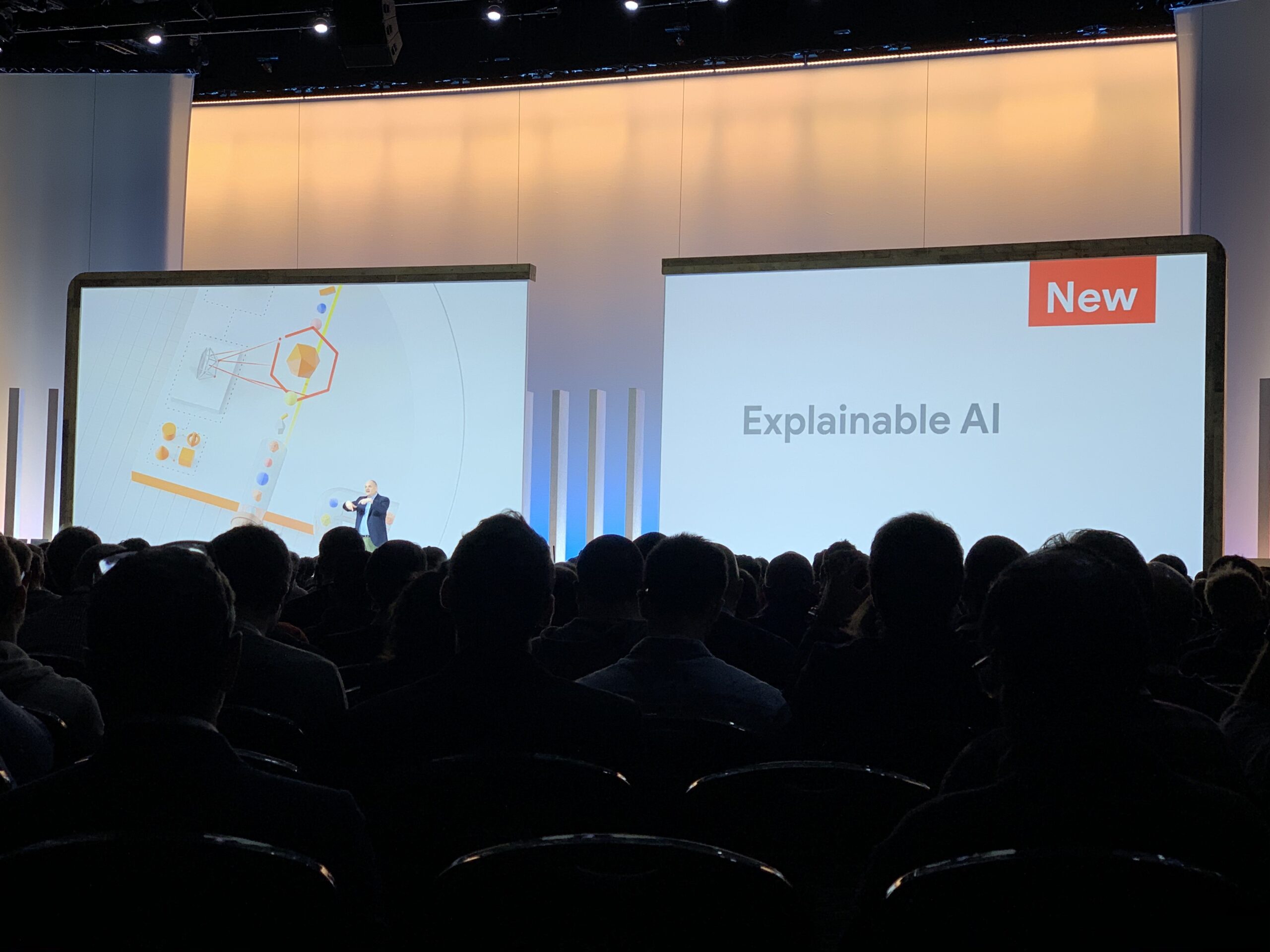 Back in April, Google announced Anthos, their approach to a Multi-Cloud reality we live in. At Next in London, Migrate for Anthos has gone GA (generally available). Anthos makes it possible for companies to convert physical servers or virtual machines from a variety of sources (on-prem, Amazon AWS, Microsoft Azure, or Google Compute Engine) directly into containers running in Anthos or Google Kubernetes Engine.

Next to that Google also announced Cloud Run and Cloud Run for Anthos to bring the benefits of serverless computing to container-based applications as well as the necessary tools so developers can build and deploy cloud-native apps directly within their favourite IDE.

One of my favourites, and where Google truly shines, is in Data & Analytics solutions! At Next London, Google announced the general availability of Cloud Data Fusion. Cloud Data Fusion is a managed, cloud-native data ingestion and integration service. It equips developers, data engineers and business analysts to easily build and manage ETL and ELT pipelines to cleanse, transform and blend data from a broad range of sources.

The whole idea is that you focus on insights and action and Google takes care of the integration and ingestion with over 100+ connectors ready for you to use.

Next to the announcement of new general purpose and workload-optimised virtual machines, Google announced some very cool (and demanded) features when it comes to Networking, such as bring your own IP and the brand new Network Intelligence Center. This last one provides a very nice view and clarity on your network topology, so you can easily manage your network operations and cut down troubleshooting time significantly. 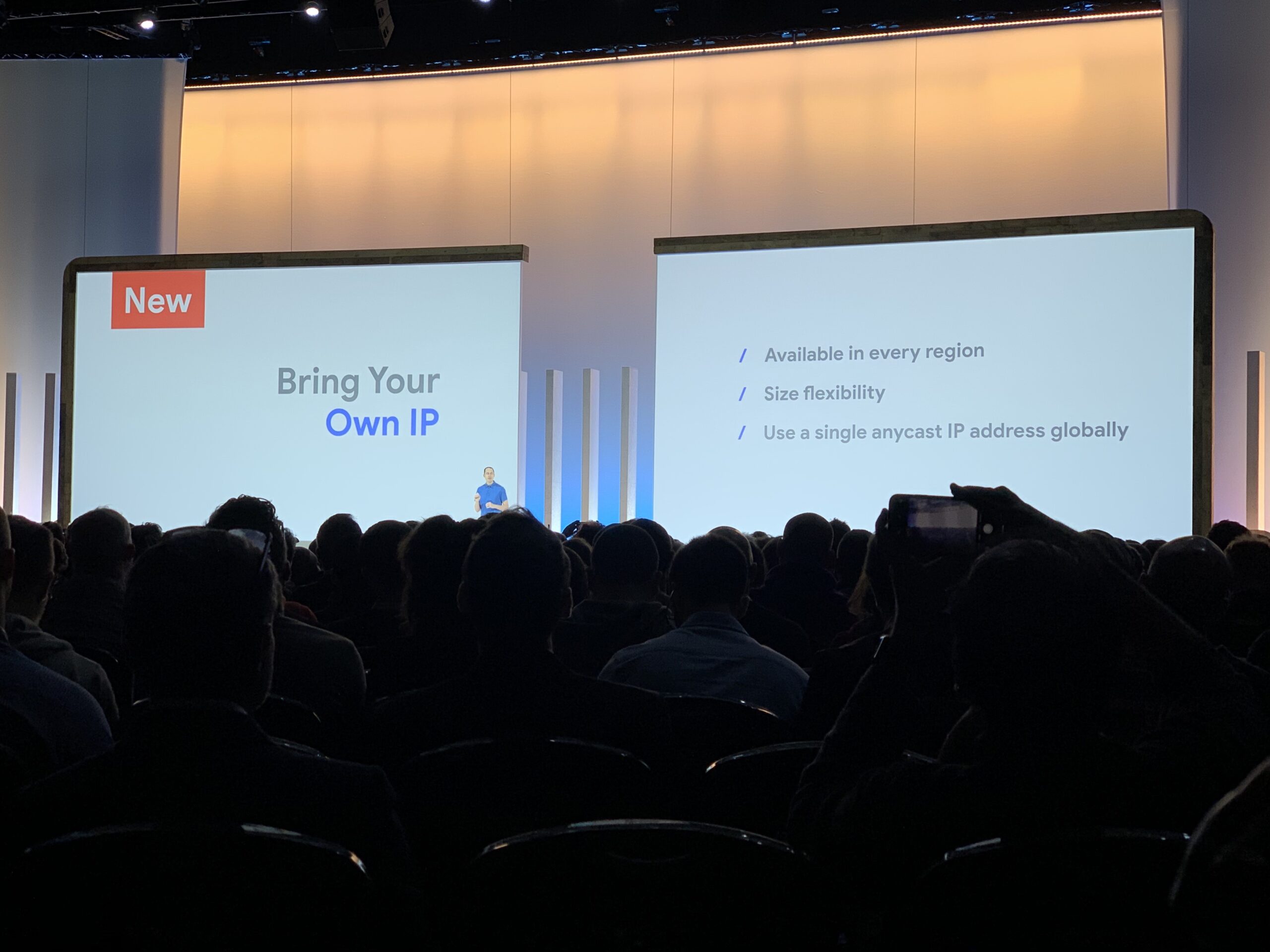 Getting things done fast and efficiently from anywhere and on any device is often faster said than done. Thanks to G Suite you get a long way ahead, as it has some very nice features built in that assist users when creating emails, crafting documents etc. At Next, Google announced assistive features in G Suite that helps focus on what matters most. 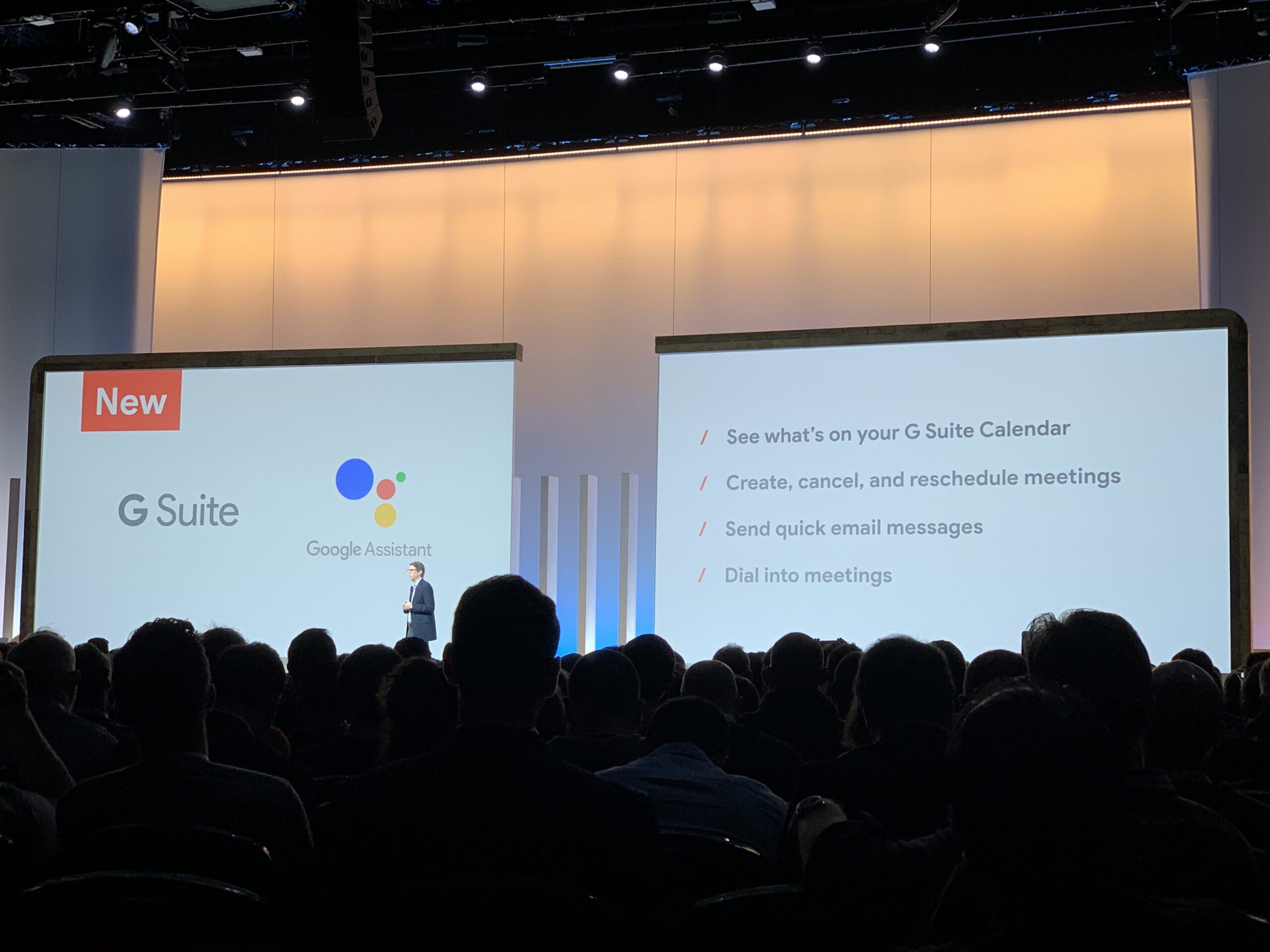 Thanks to AI, you get enhanced grammar and smart compose features in docs and with the power of the Google Assistant for your G Suite, you can schedule meetings, email colleagues and quickly dial-in to meetings using the most natural way of interacting with computers: your voice.

Want to read all announcements in more detail? Have a look at the official Google Cloud Next ‘19 UK blog post.

Now that you know everything I learned at Google Cloud Next ‘19 London, I’m looking forward to see what’s next with Google. I will be at the forefront of the ‘next Next’ conference Google is organising in San Francisco in 2020. Stay tuned for even more exciting Cloud updates! 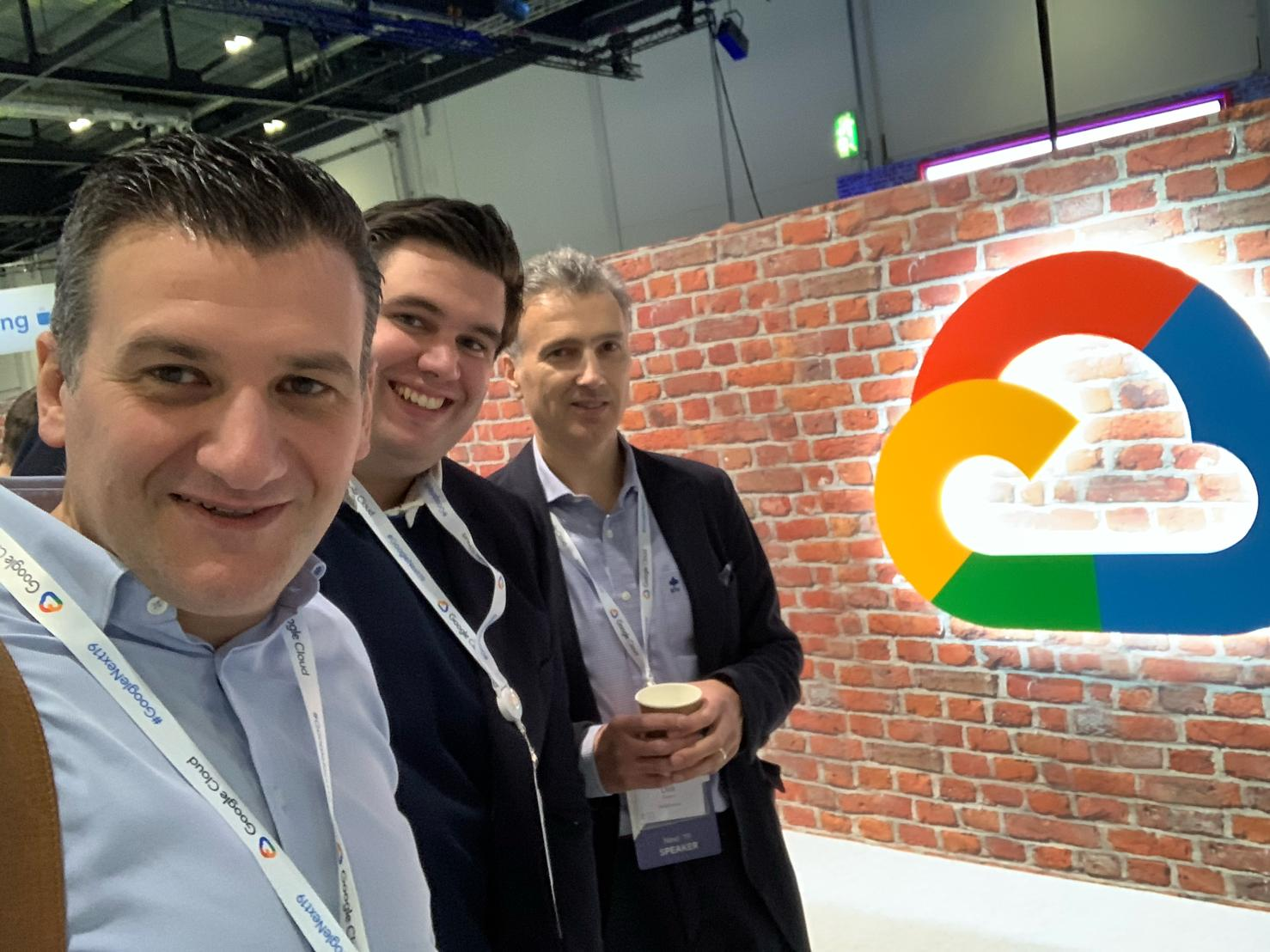 Me and our friends from Multipharma, Kevin Moens and Dirk Dussart.
Preparing to shake the Cloud & share the SAP S4/Hana story on GCP on stage at Google Next London ’19.

Want to attend a Google Cloud event yourself? Check out our upcoming events!

Need more explanation for any of these new Google Cloud functionalities?
Our experts are there to help!