Can you build a voice chatbot for your business in one day? Yes you can! Let me introduce you to a workshop concept that we’re successfully organising for more than a year now: Chatbothons. A Chatbothon is like a ‘hackathon’, but specifically for voice chatbots. Company teams of both IT and marketing/business colleagues join a Chatbothon workshop day to figure out the best use case for a voice chatbot for their business. Then they scope the project, design the conversation and actually build a basic version of their bot – all in one day. In this article I’ll tell you what to expect from a Chatbothon and why you would want to participate. 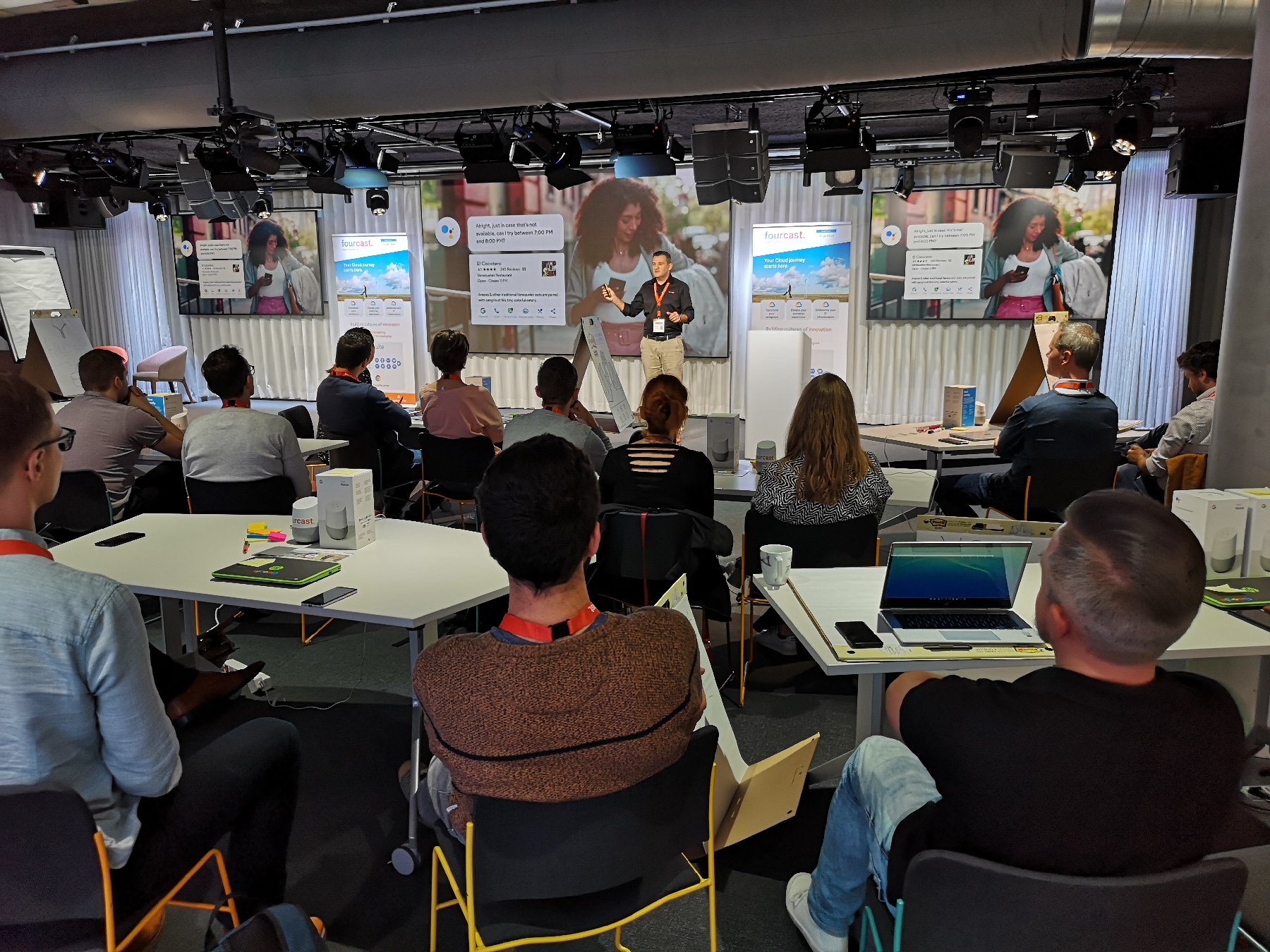 The Chatbothon takes the terms of ‘hackathon’ and ‘chatbot’ and unifies them in one full workshop day for mixed company teams of 2 to 3 team members with both IT & marketing/business profiles. These teams create a voice chatbot for their business in only 1 day at the Chatbothon. The team with the best voice bot and pitch for their bot in front of the jury at the end of the day, wins the Chatbothon. First prize of the Chatbothon is a 3-day chatbot workshop with Fourcast experts to further define and assess the chatbot project.

For those of you unfamiliar with hackathons, this is the definition of a hackathon according to Wikipedia:

A hackathon is a design sprint-like event; often, in which computer programmers and others involved in software development, including graphic designers, interface designers, project managers, domain experts, and others collaborate intensively on software projects.”

So why participate in a Chatbothon?

Lots of businesses these days are realising the power of voice chatbots for different use cases and to solve for various business needs. The most important ones are to improve their customer experience, boost their marketing results, optimise internal business processes and communications, etc..

With an increasing popularity of the use of smart speakers and voice assistants in Belgium, companies are more and more exploring what a voice chatbot could mean for their business and discover that they want this.

But all too often, IT and marketing departments get stuck at the mere idea “we want a voice chatbot”, simply because they don’t know how to get started. It can indeed seem daunting and complicated to set up a chatbot project for your business. We’ve found the best way to go forward is to just do it, and that’s how the concept of the hands-on ‘Chatbothon’ was born. 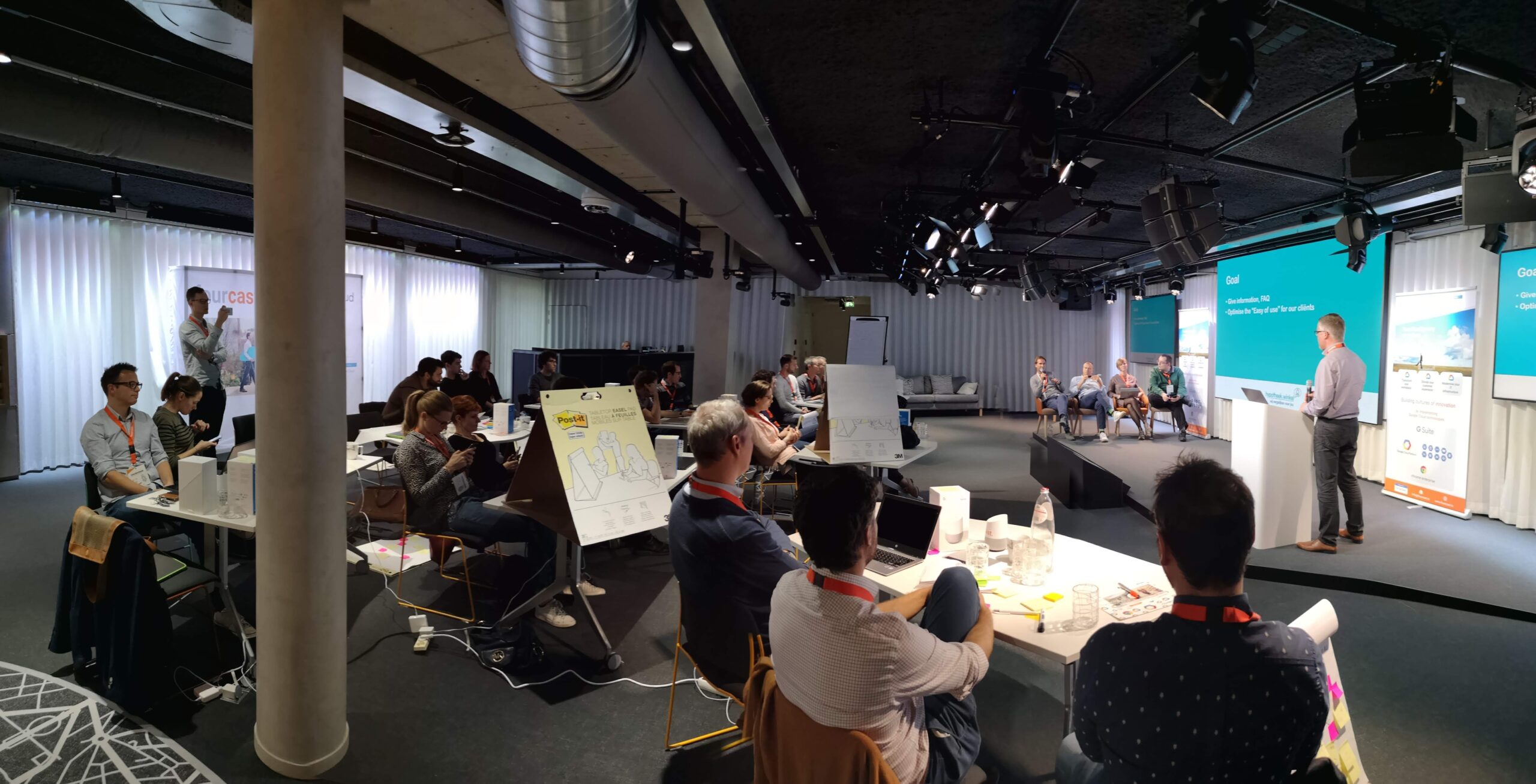 Chatbots: Just do it 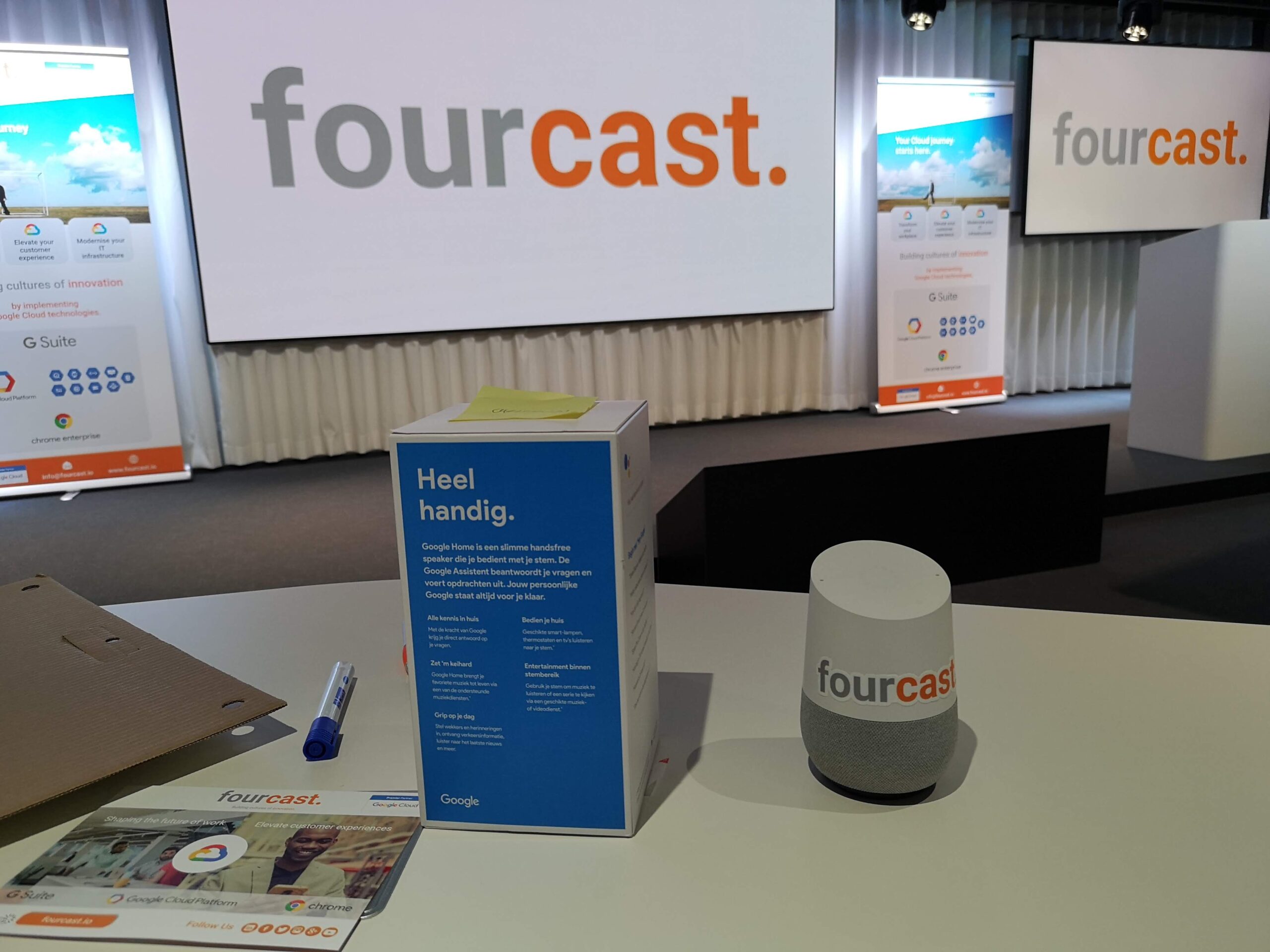 The idea is that after a Chatbothon day, companies have a much more clear view on the use cases within their business where a voice chatbot makes sense, that they get a defined scope for the chatbot project plus a first, working version of their voice chatbot on a Google Home that they can take back to the office.

Having a working first version of your bot for your business helps not only to get your team started, but also to convince others in your company of the value of your voice bot.

Another advantage? After working together for a full day, the participating companies’ IT and marketing teams are much more aligned. This alignment is something that might be a pain point, specially in larger companies, and that is absolutely necessary to succeed in a voice chatbot project!

How does a Chatbothon work? 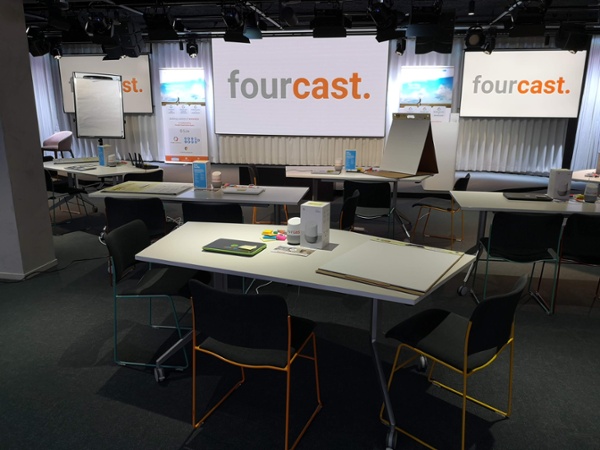 Attendees of the Chatbothon arrive in the morning and – after an energising breakfast – get brought up to speed with the possibilities of voice Chatbots for businesses right away. Different use cases of companies that are using (voice) chatbots for various purposes are described and shown.

In this phase of the Chatbothon, the company teams get a full background of the recent ‘history’ of chatbots and the current state of bot technology. The goal is to think out of the box and to get inspired in terms of use cases where a (voice) chatbot could help the organisation of each team to drive business results. 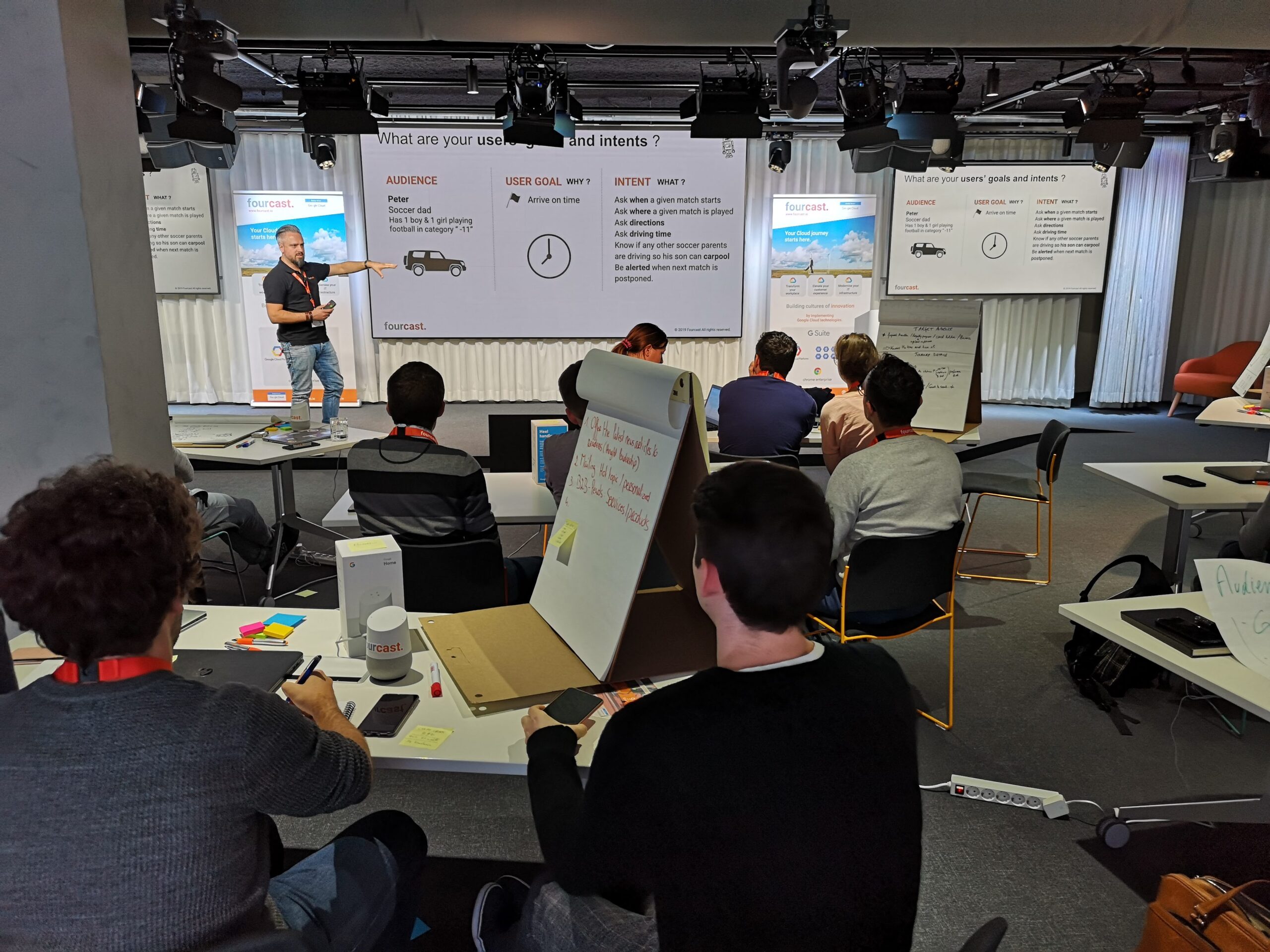 In this second phase of the Chatbothon workshop day, the teams go through a variety of criteria to shape and scope the use case that they choose to work on during the rest of the day. What will be the DNA of their bot? Which personality will it have? What’s the goal and target audience for their bot?

With the help of these criteria and under guidance of experts, the teams brainstorm and work in groups on their own project for the first time today. At the end of the exercise, they have a pretty clear idea of what their voice chatbot will become today. 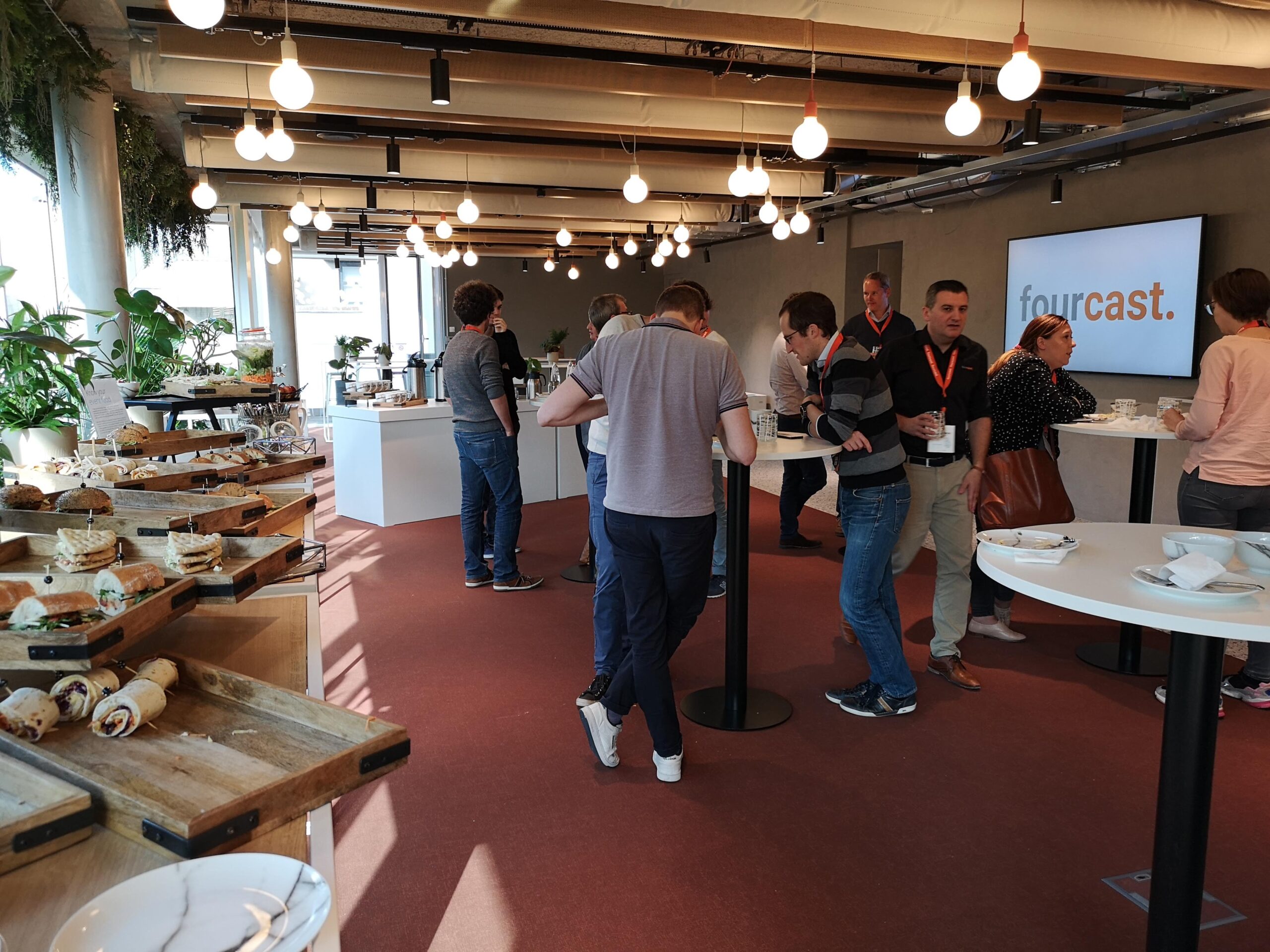 After narrowing down their chatbot project to a workable case for the day, it’s time to start thinking about conversation flows. How will the voice chatbot engage in the conversation? Which questions and answers are needed for a first version of the chatbot?

In this phase of the Chatbothon, the teams get hands-on again and start drafting the conversation flows for their own bot.

With half of all the hard work done and after a morning packed with insights, it’s time to recharge batteries and to enjoy a well-deserved lunch! 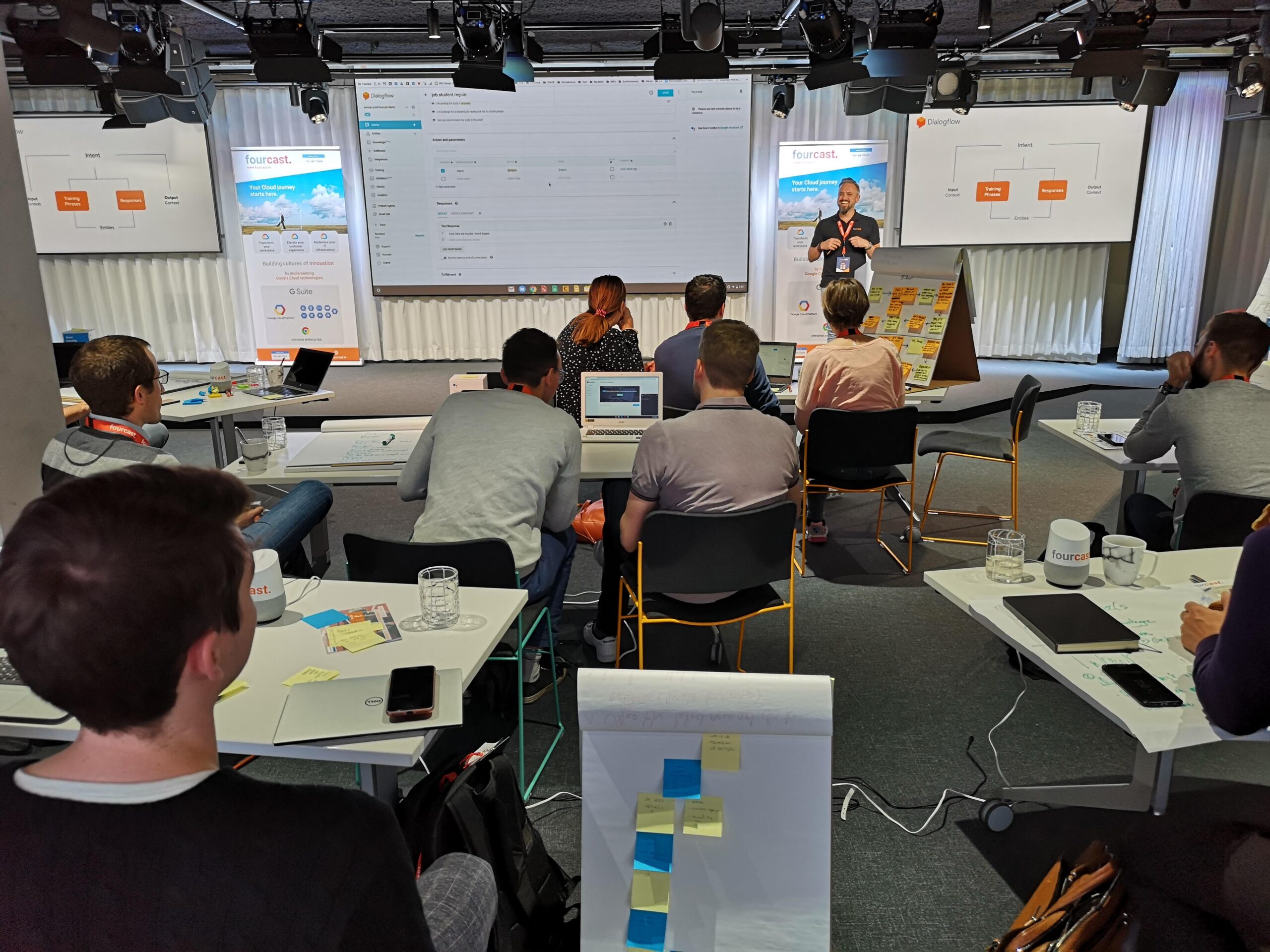 In the afternoon, the teams get an introduction and roll up their sleeves to get their hands dirty with the technology that’s making it possible to set up a chatbot or voice chatbot, very fast: Google Cloud’s Dialogflow platform.

The good thing is that, with their scoped project and conversation flows preparation in place, the teams can now focus on getting everything right in the Dialogflow platform. It’s just a matter of inputting the right information in the right place. Dialogflow does the rest. And already after a short time, the Chatbothon room fills up with the first voice chatbots talking to attendees through the Google Homes.

The Chatbothon is almost ending, and teams are now getting in full test-mode. It’s time to test if the voice chatbot is reacting the right way on the Google Home, so the teams can demo their bots optimally to the jury in just a moment. Tension is rising among the teams, the last preparations in Dialogflow and in pitch slide decks are made, and the jury starts arriving at the venue. 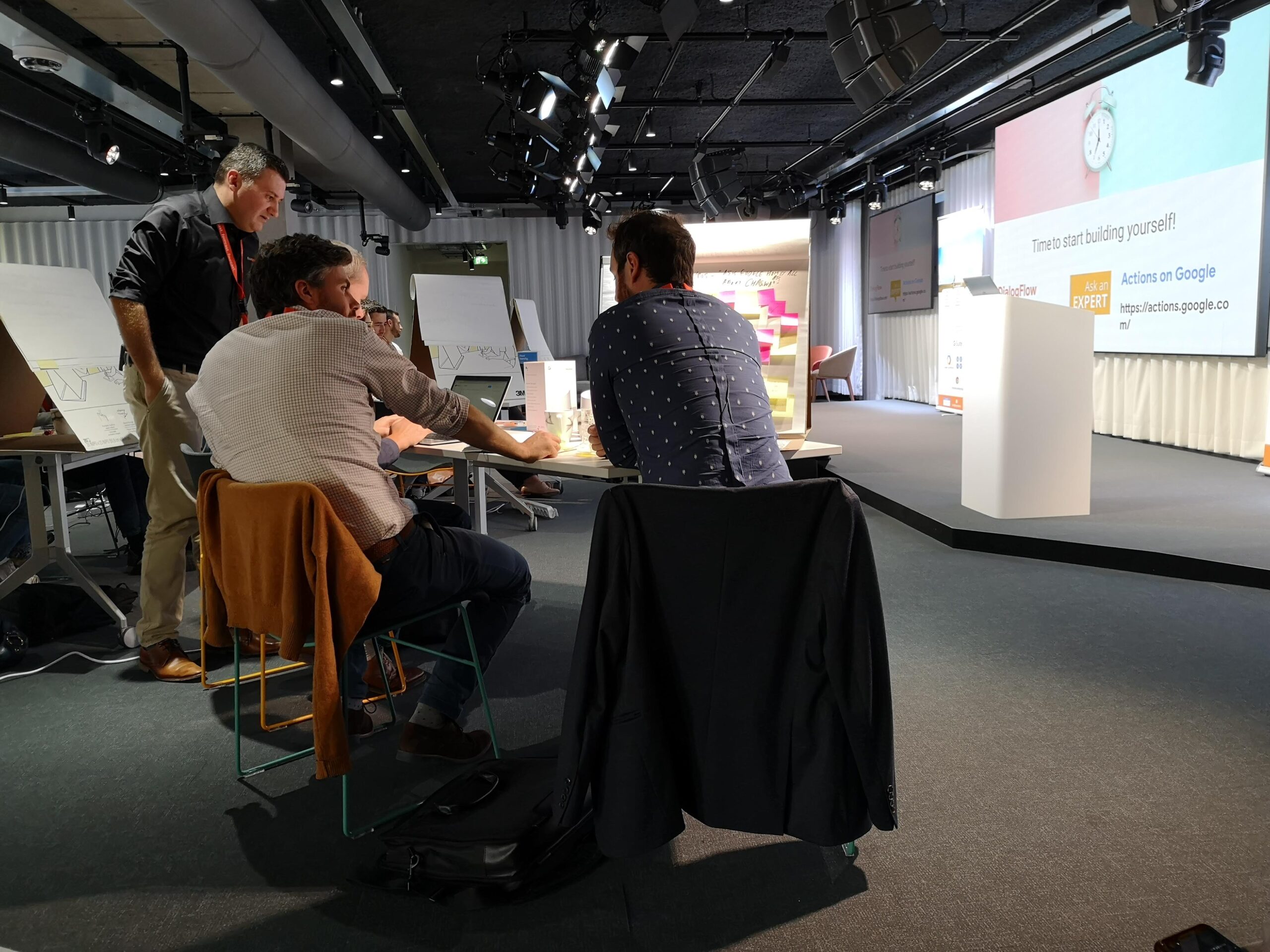 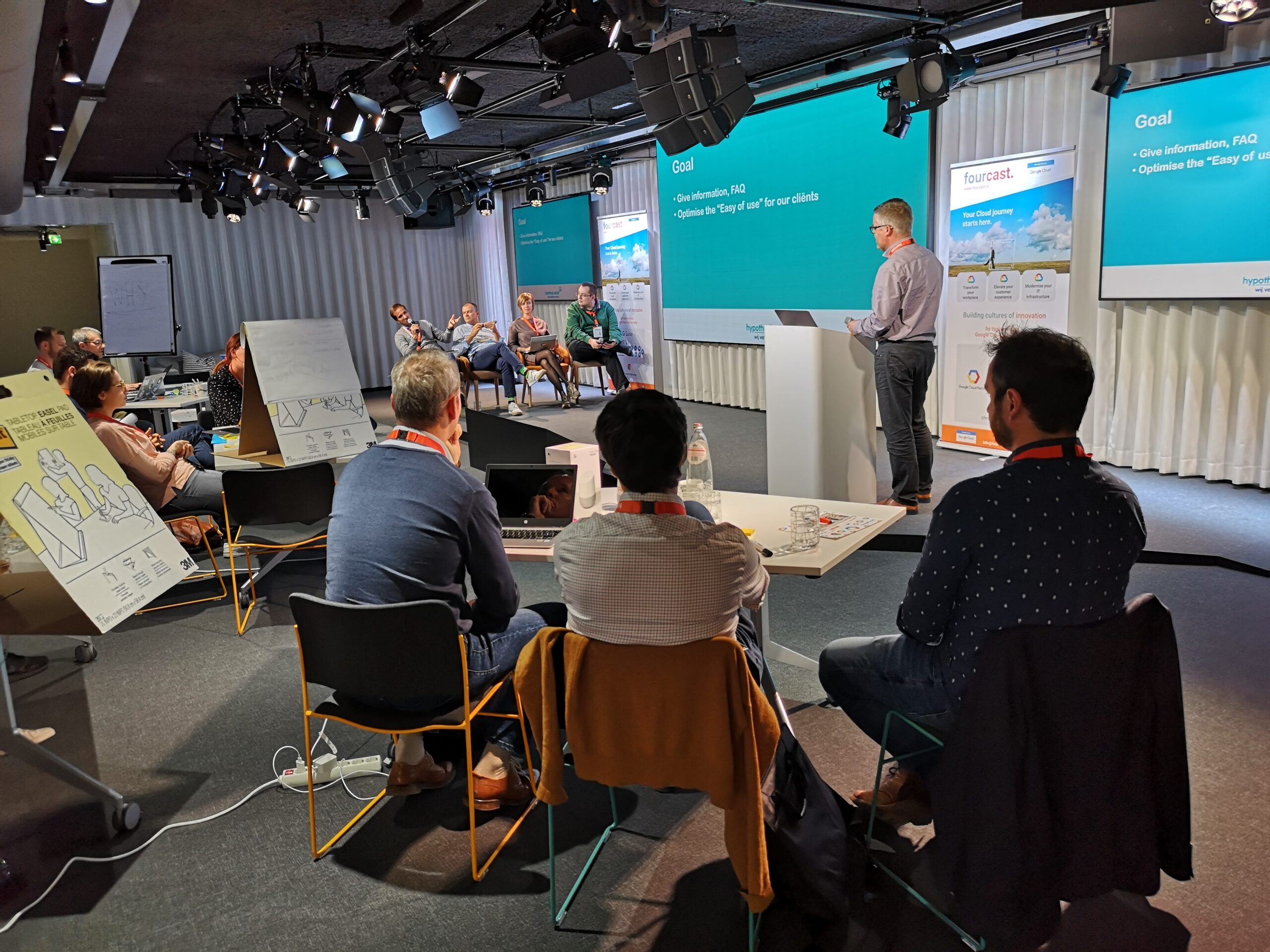 Demo time! All Chatbothon teams pitch their voice chatbot idea and project to a jury consisting out of Googlers and Fourcasters.

For most teams, their prayers to the Demo gods have worked and there is a successful demo of their voice chatbot on the Google Home. For others, the demo is going less smooth than anticipated. But all teams succeed in giving the jury a good idea of how their voice chatbot will work and how it will help their business and their customer or employee experience.

The Chatbothon is also a game with a winning team, and during the last part of the day it is the jury that takes the stage to give feedback to the pitches and to announce the winning team. After the winner’s ceremony, every team can take back their Google Home and voice chatbot project to the office. After some well-deserved networking drinks and snacks to celebrate the outcome of the day, that is.

Thank you to all company teams that participated in our Chatbothons already! 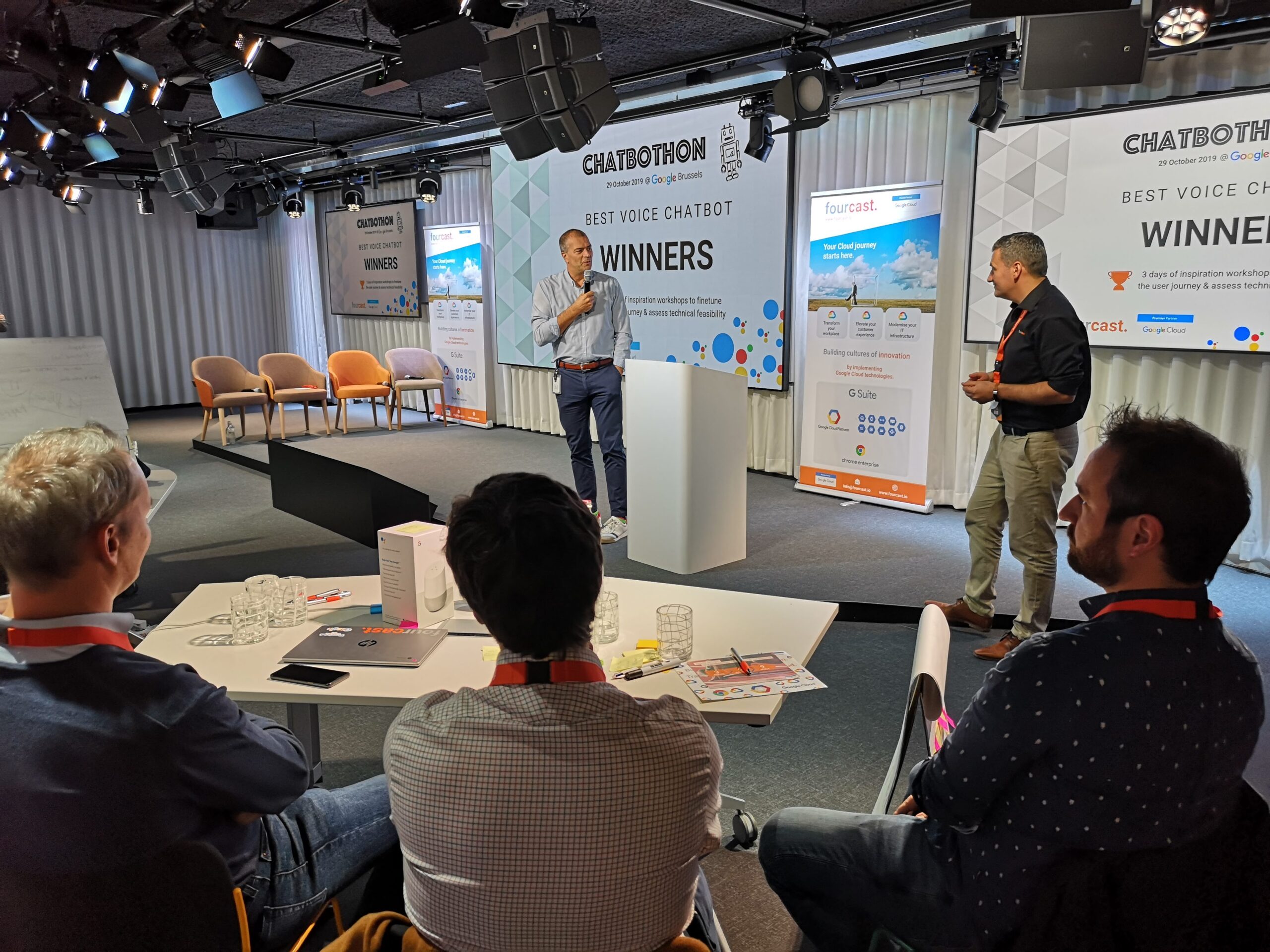 Want to join a Chatbothon? Join our upcoming Chatbothon on June 19th at Google Brussels!