As from the beginning of September, you can listen to NRJ live radio from your Google speaker or smartphone via the Google Assistant. In this post, you can read more about this voice bot that we developed together with our customer NRJ and agency Wavemaker. 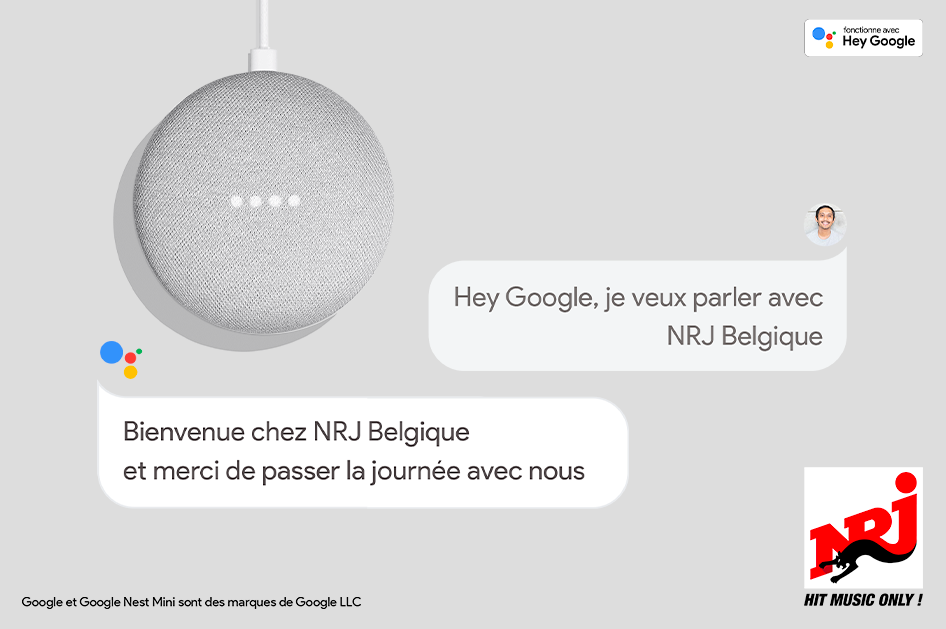 A bot in an omni-channel world

More than ever, we live in an omni-channel world. Users expect to be able to get the same brand experience across multiple channels, with the same satisfaction. Radio doesn’t go against this huge paradigm.

Indeed, people want to listen to their favourite radio channels from any device, anywhere.

NRJ Belgium has understood this phenomenon really well. That’s why they called us to help them fulfil this gap in their customer experience, by building a voice app on Google Assistant that people can trigger to listen to NRJ live radio from their smart speaker or their mobile phone.

NRJ wanted to provide an outstanding experience for people that would use their NRJ app. They wanted them to feel as close and comfortable as possible with the idea of listening to NRJ radio from another device than a radio.

To maintain this link between the radio station and its listeners, we decided to work with custom voices and bring some personalisation.

For the ones that have already used the Google Assistant, you have already noticed the default voice of Google, that doesn’t sound human at 100%. We didn’t want our app to sound a bit robotic.

That’s why we decided to use the voice of Richard Darbois for this voice bot. Richard is a famous radio animator of the NRJ station and also the French dubbing voice for Harrison Ford, Danny Glover, Richard Gere, Arnold Schwarzenegger & Sylvester Stallone.

We gave our bot a voice that everyone has already heard in the French audiovisual landscape. This is the best way to create a bond with the listeners and make them feel welcomed by someone they already know.

Then we also added some personalisation in the speech responses of the bot, so it doesn’t respond with the same answers every time you trigger one of its functionalities. This gives even more the feeling that we are talking to a real human.

What can the user do when using this bot?

Note: At the moment, the bot is only available in French. So if you want to talk to the bot, make sure you have configured French as primary (or secondary language) for your Google Assistant and make sure to speak to the bot in this language.

How did we work with our partners?

The work with our customer NRJ and Wavemaker (our creative partner on this project) went in a smooth manner.

Collaborating with these stakeholders has been a pleasure, as we were all going towards the same direction from the start and had the same vision on how we wanted the final product to look like. And it became a success!

Brands like NRJ are enhancing their customer experience significantly through the development of voice bots with a personalised voice. This way, they’re personalising the interaction with their listeners & increasing the engagement with their brand. I hope I gave you a good overview of what this voice bot is capable of doing. Time for your own voice bot on Google Assistant?