In part 1 of  this article series about deploying multi-tenant Kubernetes deployments in a VPC-native cluster with Spinnaker on Google Kubernetes Engine (GKE), we set up a basic CI/CD solution using Spinnaker and a Single GKE cluster. The solution as-is from part 1 is not suited for production because any change made by a developer would be automatically publish into production without proper validation. In this second article, we are going to build on top of the infrastructure we set up in part 1 and learn how we can add new environments to develop and validate our application without impacting the production environment. 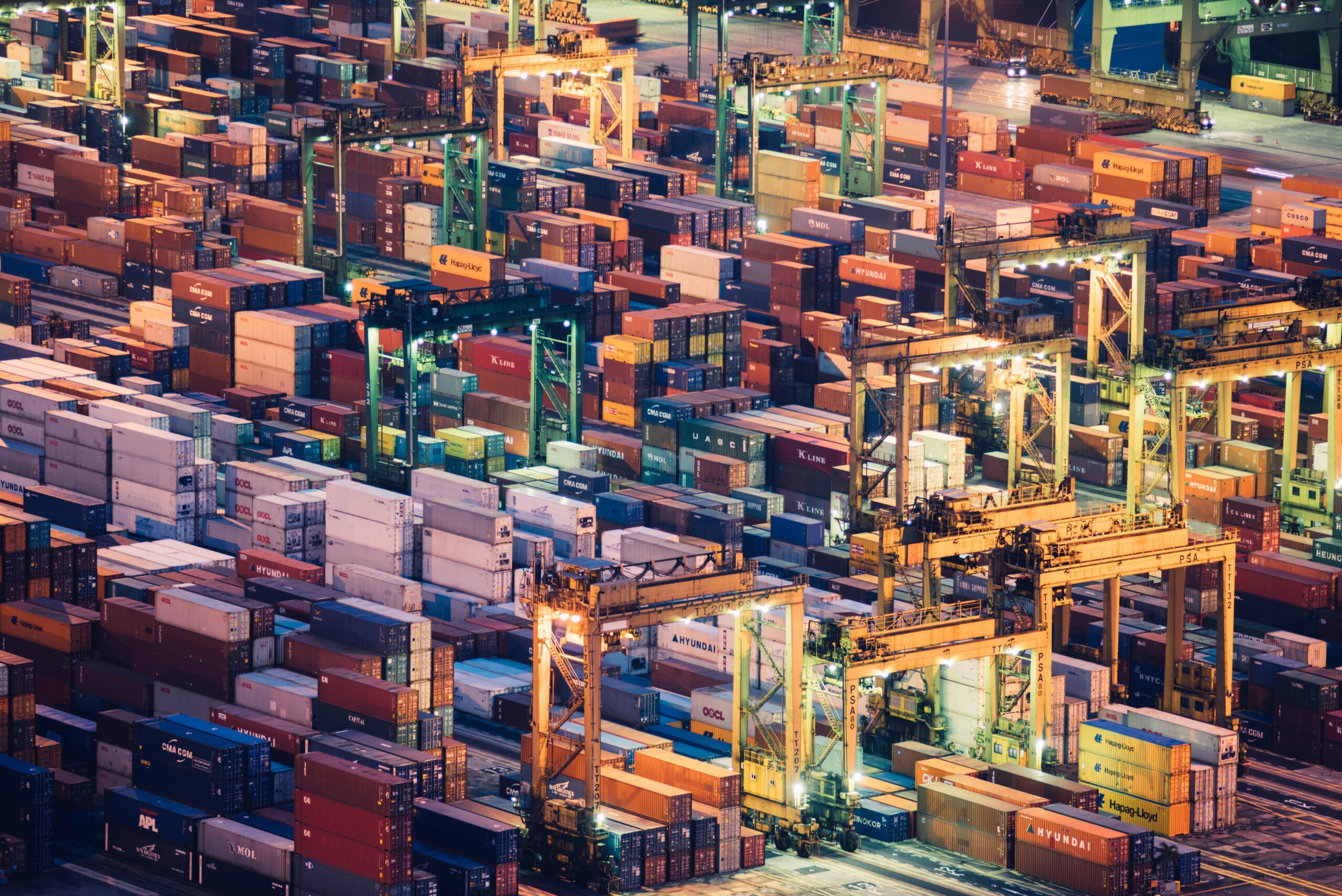 By the end of this article, we will have a Development, Staging, and Production environment which will be used by Spinnaker to deploy the application in.

Making sure we deliver a stable and high quality application requires proper testing and validation before being made available to the users. Failing to do so is likely to result in long delays between releases, incomplete (or lack of) new functionalities, or even unexpected breaking changes in the application – making it partially unusable by the users.

This can lead to financial loss for the customer relying on the solution, make the customers unhappy and impact the reputation of the company. In part 1 of this article series, we’ve only set up one environment for the users, which has the problems we just described.

The application needs to evolve to offer new functionalities and having the development team directly working on this environment has a high chance of impacting the quality and reliability of the application. Indeed, developers can easily introduce changes that can negatively impact the user experience. In addition, some components of the infrastructure might change. This could potentially include breaking changes.

For example, the Kubernetes version running on the cluster can be upgraded by the Cloud Provider and add incompatibilities with some Kubernetes resources, breaking the application even if it was not modified.

If acceptance tests are performed, it is possible that one functionality might be working when tested and be broken after an update by the developers, which could then be wrongly labeled as validated.

To prevent any conflicts, we are adding an additional environment called Development. In this environment, developers can safely push their changes on a day-to-day basis without impacting the Staging and Production environments. 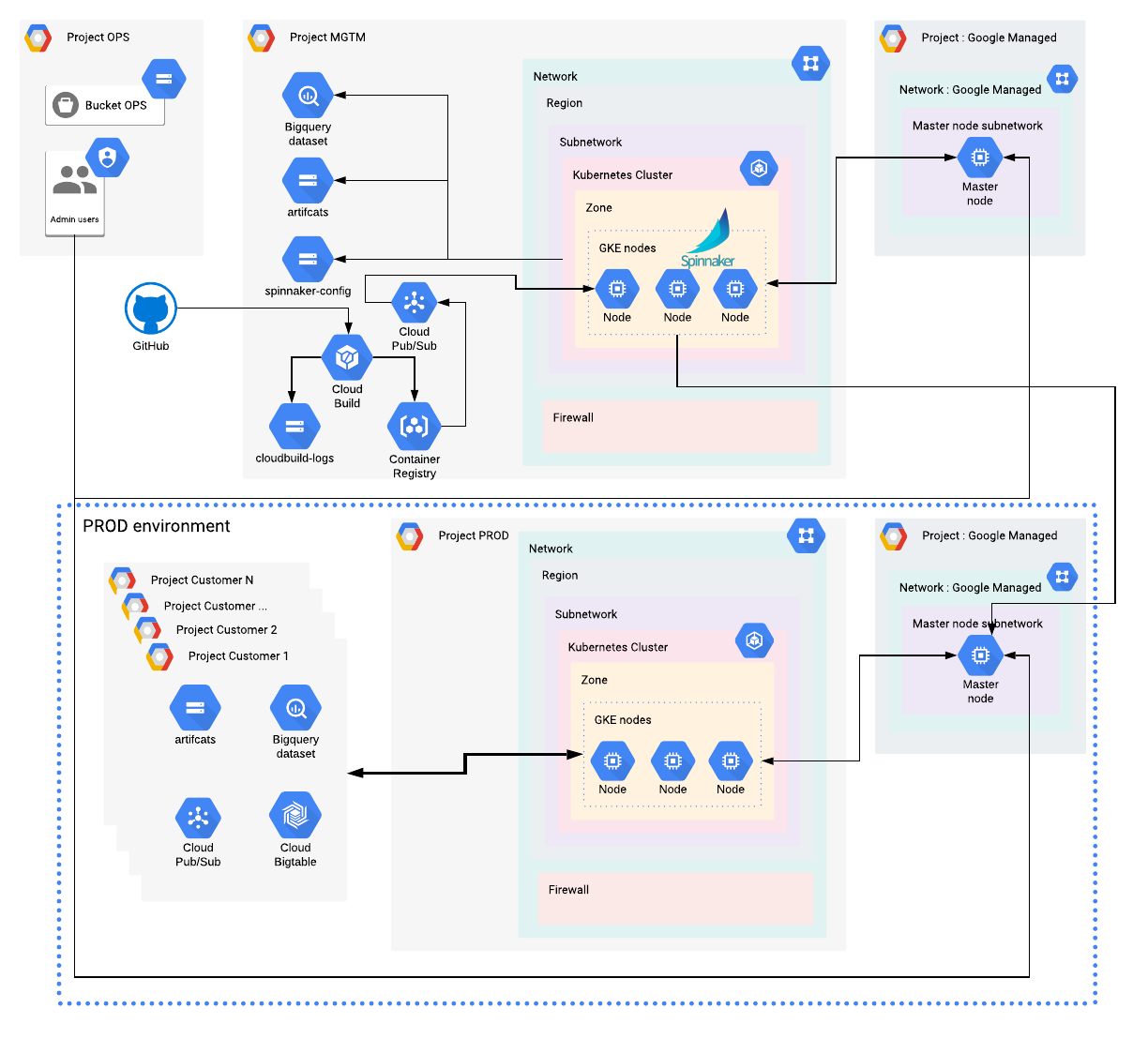 We are adding 3 environments to our current infrastructure : Development (DEV), Staging, and Production (PROD). On the diagram, we are only showing one additional environment (PROD), but all 3 environments can be represented with the same components within the blue rectangle.

Each environment has its own dedicated GKE cluster, running a specific version of the application:

We add dedicated projects for each customer, to store their own Cloud resources and data to fully isolate them from other customers. For example, BigQuery Dataset, Pub/Sub topics, etc..

It is often necessary to isolate the Kubernetes resources from each customer. Using a dedicated GKE cluster per customer is possible to meet this requirement, but it quickly becomes quite expensive and increasingly difficult to manage. Instead, Kubernetes has the concept of Namespace, which virtually isolates the resources in a single physical cluster.

The MGMT project will only run Spinnaker workloads necessary to manage the three other environments. Only Spinnaker can deploy the application in an environment, according to the pipeline’s definitions.

That means we won’t deploy any other workloads in our MGMT cluster.

By default, Spinnaker can only deploy resources in the namespace it is installed in. In our case, it’s in the “devops” namespace in the MGMT cluster. To implement the architecture we defined, we need Spinnaker to be able to deploy workloads across multiple clusters and namespaces. To do so, we need to generate credentials for Spinnaker that have access to a specific namespace in a specific cluster. 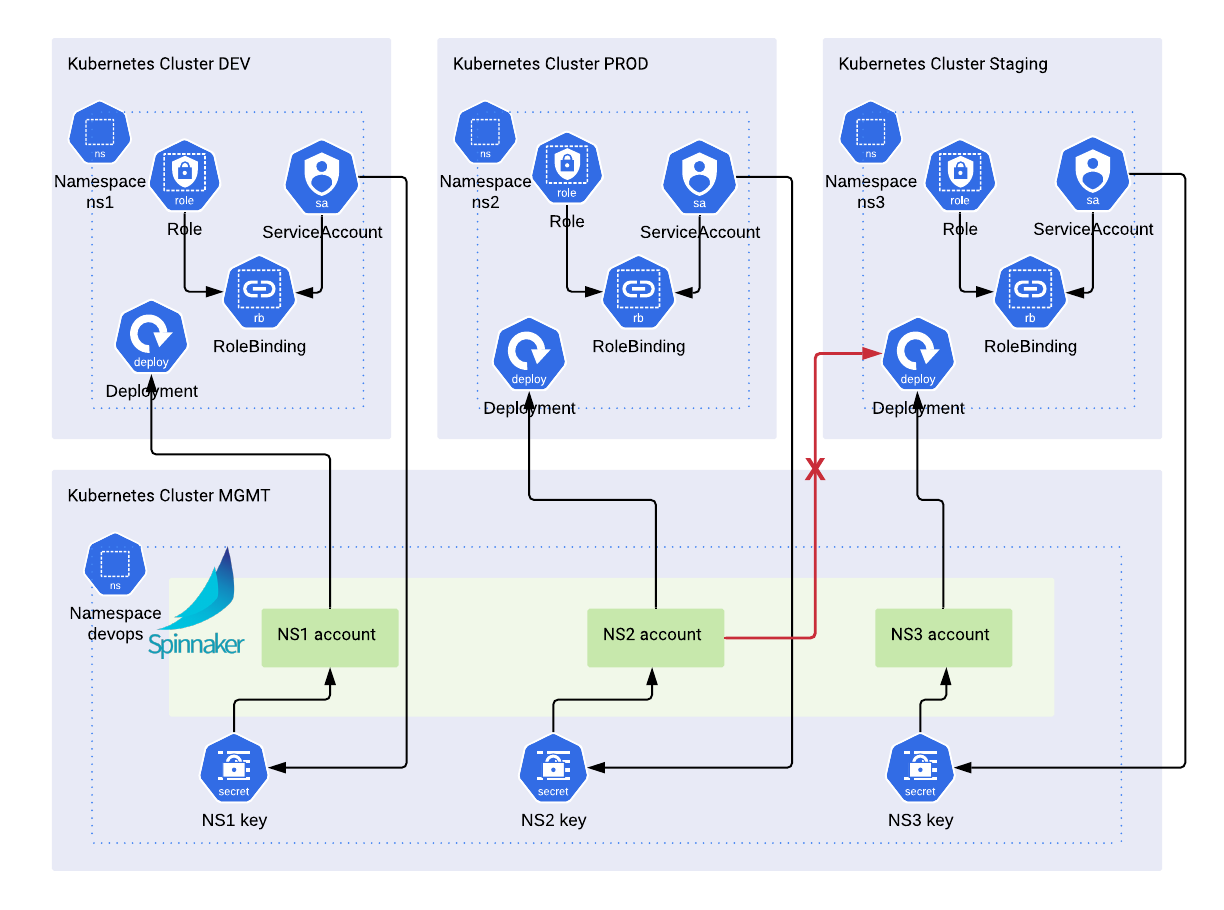 Spinnaker uses the Kubernetes authentication methods to deploy Kubernetes resources. We are going to generate one Kubernetes service account per namespace with defined permissions (RBAC) and save the credentials in a kubeconfig file, which will be provisioned to Spinnaker by Halyard.

Each kubeconfig file is linked to one and only one set of credentials. The credentials are saved in the “devops” namespace in the MGMT cluster as a Kubernetes secret. Once provisioned, Spinnaker will have a Spinnaker account linked to the namespaced credentials. A pipeline will be able to deploy the authorised Kubernetes resources into that namespace only.

Trying to deploy any resources in another namespace, within the same cluster or not, will fail. This is great to isolate resources and prevent pipelines to manage resources from a non-authorised namespace.

Spinnaker accounts are managed by Halyard using the Kubernetes Provider. Thus in order to automate the credentials provisioning, we need to use Halyard to configure new Spinnaker accounts. Manually, we would use the Halyard command

where the parameters include the kubeconfig credentials file, the namespace and additional parameters we want to use. This command adds a new account to Spinnaker. In order to take effect, Spinnaker must be redeployed with Halyard

After a few minutes, the account is available in Spinnaker in the Deploy Manifest (v2) stage.

Because we have set up RBAC on the credentials, this account can only deploy resources in the designated namespace. Deploying resources in another namespace will fail as expected, preventing unauthorised operations.

Adding or updating accounts manually can be a challenge when the number of accounts grows. To simplify the management of accounts, we are going to automate the process. To do so, we’re going to use Terraform.

In each environment, we have a specific configuration for the namespaces, and thus the accounts, we want to have. In this example, we have a new environment (dev) alongside our mgmt environment.

where we have hidden the full configuration for simplicity. We are going to use that configuration as an entrypoint for our provisioning process.

We create a new module named crosscluster in which we add the necessary resources to perform the provisioning, including service accounts, namespace, roles etc. We also write a shell script executing the Halyard commands which is run by a kubernetes job. Because halyard is running in our mgmt cluster, we can use the halyard API to run any commands we want.

❗Halyard does not have an HTTP API, so we cannot use curl to send commands. Instead, it relies on communication via WebSocket. We use wscat to execute commands from the Halyard running in our mgmt cluster. 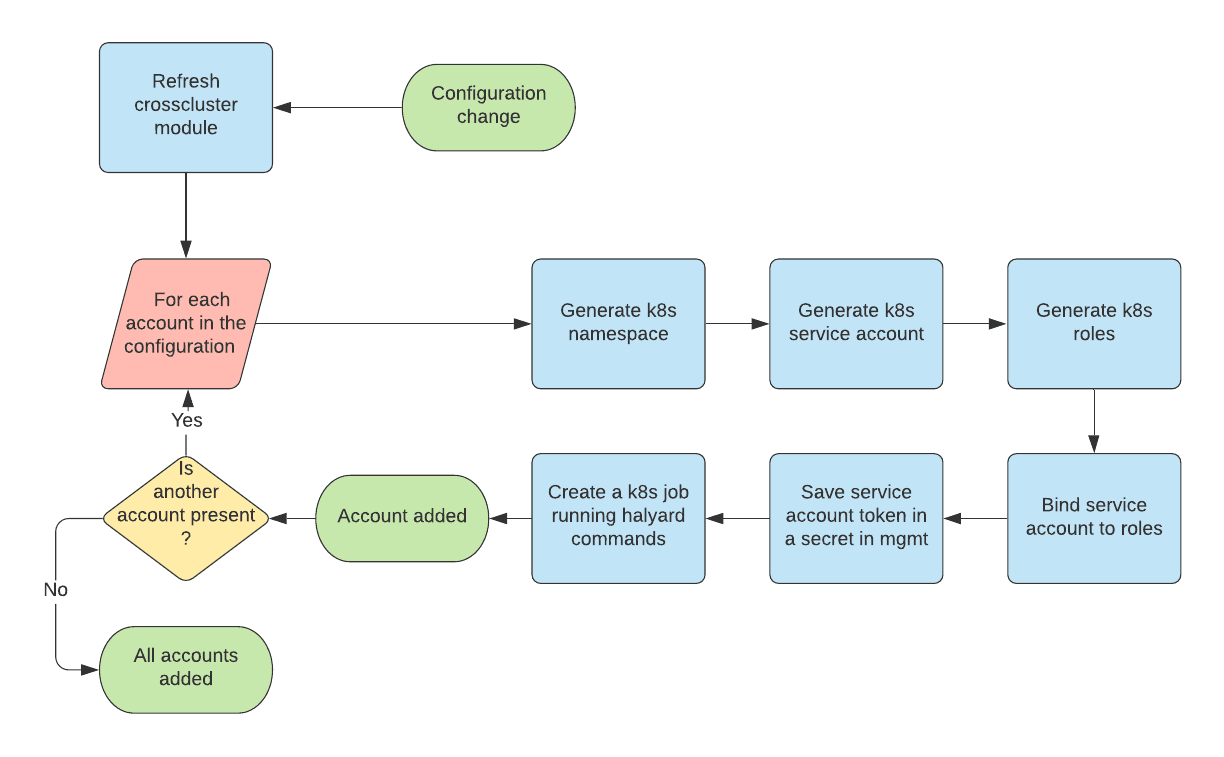 The workflow is the following:

Now that we have set up our environments and have a way to provision Spinnaker with new credentials dynamically, we need to define the deployment strategy for each environment.

In part 1 of the series, we used GitHub as a code repository which contained only one branch, the “master” branch. We are going to upgrade the branching model to the GitHub flow branching model with a few adaptations, which better suits our needs. This is perfectly fine according to the definition of the GitHub flow.

❕Different teams may have different deployment strategies. For some, it may be best to deploy to a specially provisioned testing environment. For others, deploying directly to production may be the better choice based on the other elements in their workflow.

This is the deployment strategy we are going to use in this article:

To reflect this strategy, we create Cloud Build Triggers based on the branching model:

With this strategy, the “master” branch is deployable at all times and always contains the latest validated release of your application.

Release branches are used to work on a release candidate which is in sync with the Staging environment. Finally, “feature” branches are used to develop new features and are deployed first in the Development environment. Ongoing development of new features and functionalities can be deployed without impacting the Production or Staging environment. Validation of a release candidate is not impacted by daily changes made by the development team and can be performed without impacting the Production.

> It is possible to work only with “master” and “feature” branches, like described in the GitHub flow, and create a deployment strategy based on those branches only. However, using “develop” and “release” branches is a nice addition to better control what is deployed in the Development and Staging environment without impacting the “master” branch.

In this article, we have seen that we can improve from a basic CI/CD solution using a single cluster to a more complex solution which better fits the needs of a production-grade environment.

We have set up a Development, Staging and Production environment with Terraform. We isolated the Kubernetes workloads per account, using Kubernetes namespaces, and protected them with dedicated credentials and proper access control. We also improved the Spinnaker pipelines to use accounts in order to only deploy workloads in authorised namespaces, preventing accidental or malicious operations.

By setting up a branching model, we were able to control what code would be deployed in which environments and when,. This allows us to easily develop, test and release new features for our applications automatically.

Spinnaker is now in control of the deployments for all environments and namespaces, as it should be. However, it also becomes a weakness and a potential central point of attack: even if we can’t execute pipelines which don’t have the right account, it is still possible for a Spinnaker user to modify, execute or delete Spinnaker resources. If a hacker can breach Spinnaker and access it, it will have the same capabilities than any Spinnaker user.

In the next article in this series, we are going to focus on security and we will see how we can protect Spinnaker by authenticating users and use proper RBAC to protect the Spinnaker resources such as accounts and applications. We will also see how we can further protect our Kubernetes Clusters by using Authorised Networks, Pod Security Policies and mTLS between services with Istio.