It’s been a while since the team at fourcast found themselves jetlagged, overrun by hordes of geeks and for some of us, slightly woozy from all the great sessions at this summer’s tech walhalla that was Google Next in San Francisco. But now, as the London edition of Google Next is nearing and the dust of all cool announcements  is settling, it’s even more clear how fast things have been moving these last years  – especially for chatbot technology and natural language processing. And what a challenge it can be for any business to simply keep up with all technical possibilities. In this blogpost I’d like to recall a small anecdote from the ebay’s Google Next ‘18 session on their ShopBot project, that perfectly illustrates this struggle…

So, let’s have a look at 3 key moments in time for eBay’s history.  This online retailer has actually been around since 1995 – and yes, that’s a dial-up modem you hear making the most annoying sound in tech history but I’m talking about some events in its recent history. 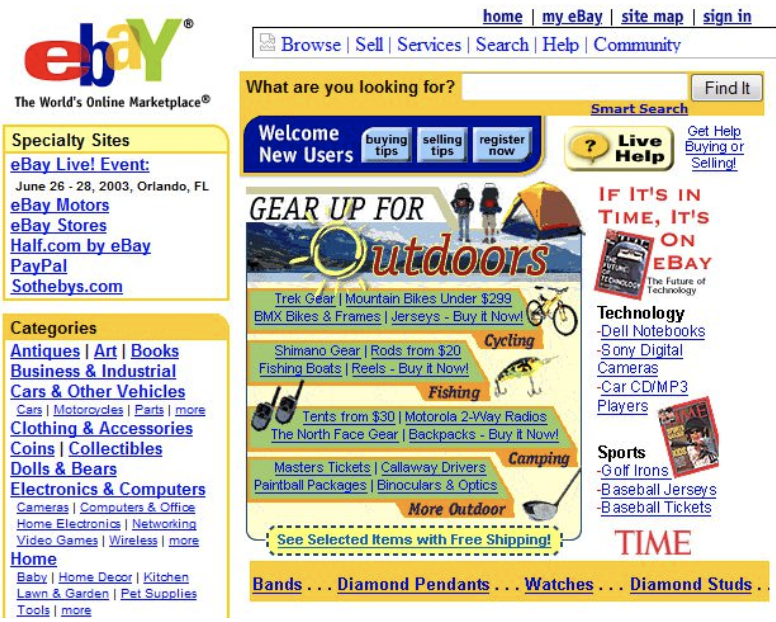 22 years after it was founded, eBay presented its first heroesque endeavours (well, sort of) building a production-grade chatbot. They created their Shopbot using the slightly fantastic DialogFlow (formerly Api.ai), a chatbot conversation builder that has been part of the Google family since 2016. 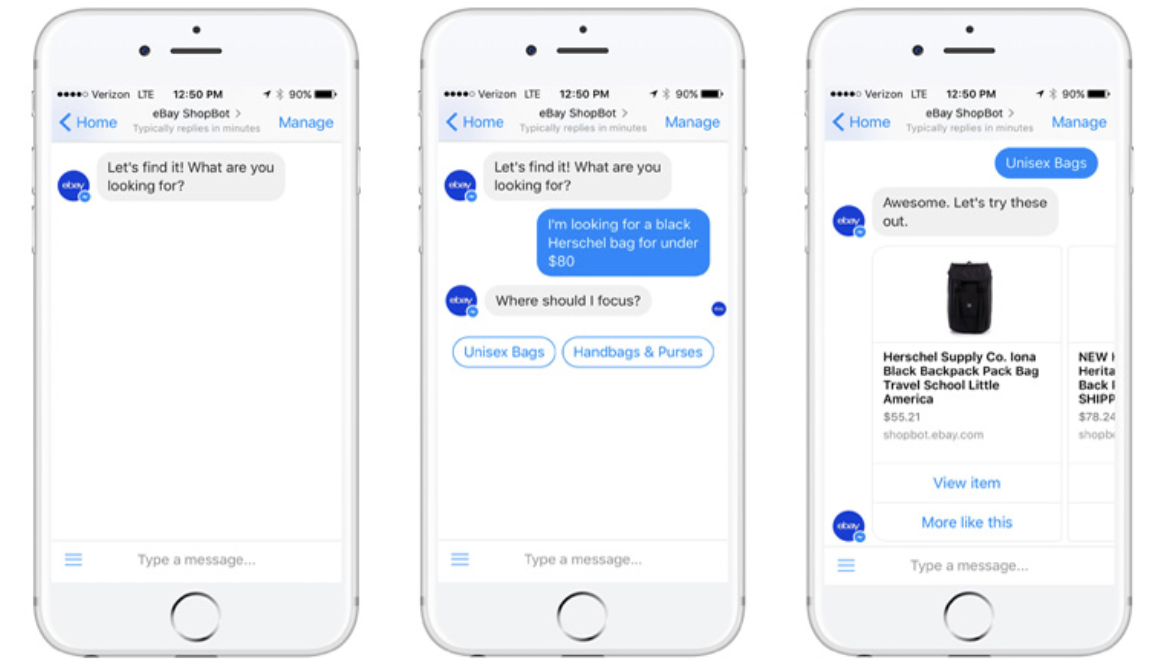 The chatbot helped users find items for sale, and was a natural language alternative to the standard search experience offered by its website and mobile app. The bot was first delivered on the Facebook Messenger platform in 2016 (with 1.2 billion users, an obvious choice) and on Google Assistant in 2017. While the bot had its flaws and limitations, eBay rightly embarked on the journey that you just have to make when you need to be pushing your business forward by creating new customer experiences. That means: embracing the technology that is available, building a first experience for your tech team, and failing forward if needed. And of course with DialogFlow, getting that first bot out there is easier than ever.

However, since Next ‘17, the engineers at eBay figured they needed more robust tools. 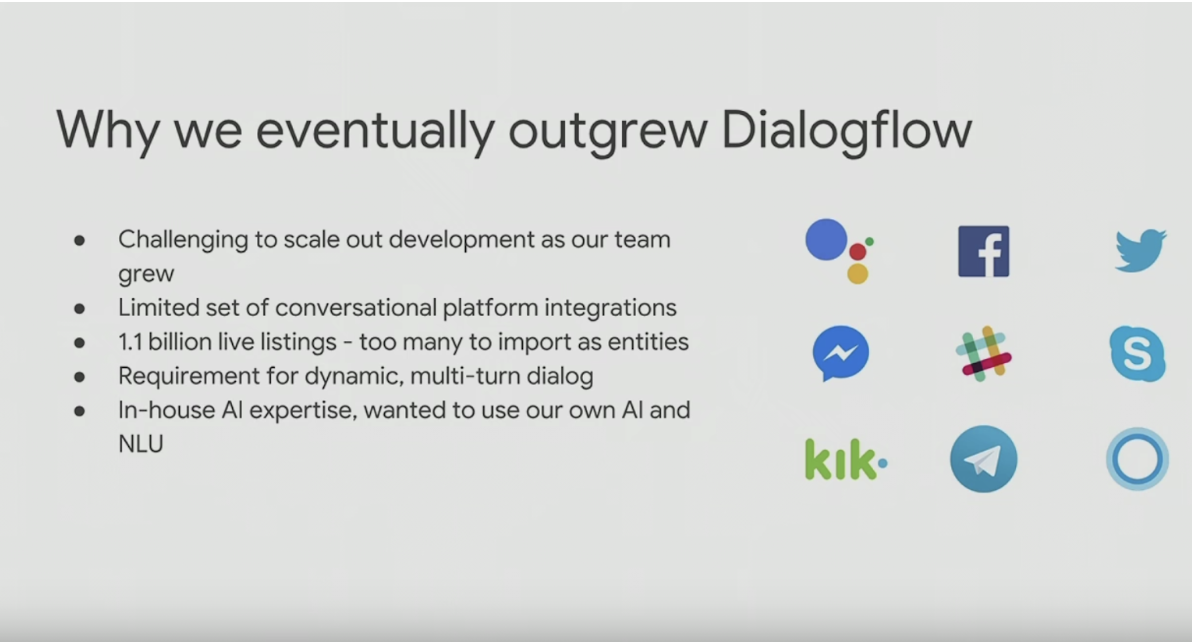 They needed a platform-agnostic way to allow chat conversations between end users and their backend system holding all the merchandise info. And with 1.1 billion product listings to be imported into the conversation layer, they seemed to have “outgrown” DialogFlow capabilities at the time.  So they evaluated what was available at that point in time, analysed their (future) needs and figured: “Hey, we’re gonna need a bigger boat. So let’s build it ourselves.”  And that’s what they did – build their own AI stack on GCP, with team of about 40 enthusiastic engineers.

So here was eBay on stage again at Next ‘18. You could see Joel, the software engineer on the ShopBot team who was presenting their story, was nervous at the start of his session. Now that may have been because he was speaking to a room (not so full) of tech geeks, or because he was being recorded for the world to re-watch on YouTube, or because he’s well – like most of us – more comfortable doing code than doing words.

But my guess it’s because of 1 particular slide that he knows is coming up in his presentation: “Why we aren’t using Cloud Functions”.  Probably just hours before going on stage, the eBay team had to edit that one because the day before the general availability of Cloud Functions had been announced, removing all obstacles eBay had experienced before. 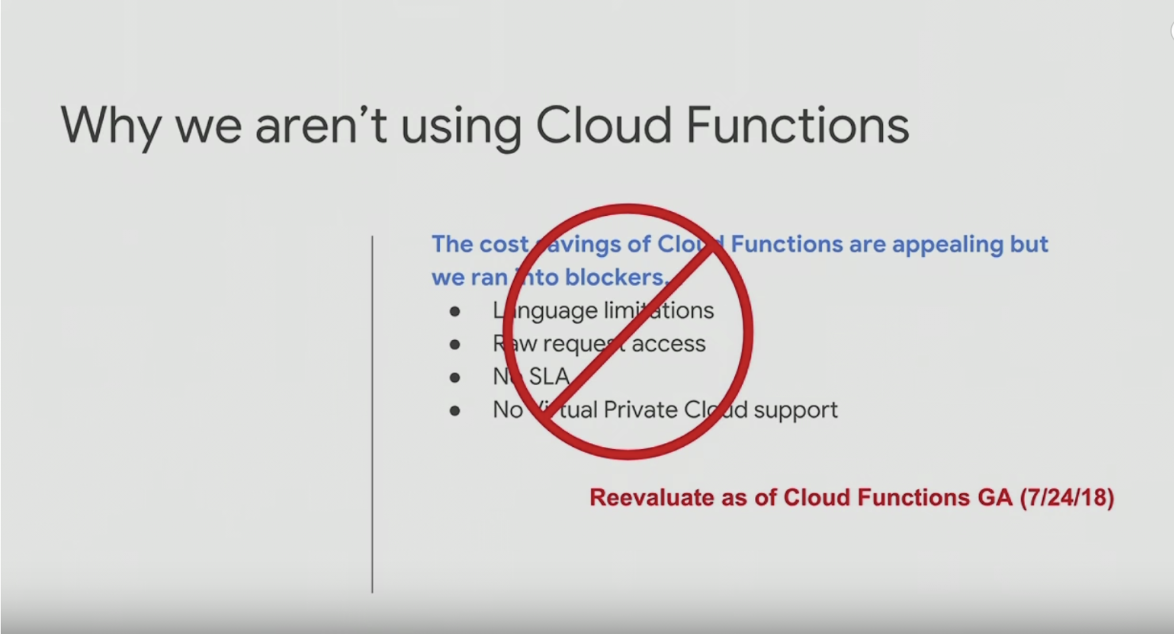 So, eBay at the time had a lot of valid reasons to be building their own AI stack. But then a year later, many if not all of those missing features in GCP and Dialogflow  were delivered and announced at Google NEXT ‘18, making many of their efforts probably redundant.

So how is eBay’s bot doing now you ask ? Well, it’s not doing anything. If you surf to https://shopbot.ebay.com/ you will see  that ShopBot as such is now no longer available. Some of its features (like the visual search, where you send a photo of the item you are looking for) are integrated into the mobile app, and – in some regions – you can invoke eBay through Google Assistant.

Like eBay, many of fourcast’s customers are using Google’s technology to build what’s next for them in reimagining their customer experiences. And some of them find themselves in the situation where they have to choose between either developing custom solutions on GCP that can maybe go to market earlier, or waiting for a more mature and stable offering from Google.

Whatever the choice they make, they will gain from it either way: either a lot of valuable expertise  and early market feedback, like eBay, or the assuring knowledge their teams will not have wasted their time on building a very nice & sturdy lifeboat when you just know that an even bigger and better boat is being built in Mountain View, CA.

Interested in a chatbot for your business? Looking to elevate your customer experiences & innovate? Join our voice chatbot event at Google Brussels on 26/10/2018 or contact us!