Choosing a productivity software is a tough decision to make. Gone are the days where Microsoft Office was the only option ; it now faces competition from Google Workspace.

In this article, you will discover which one scores best across the 5 areas that companies care about the most : collaboration, communication, satisfaction with IT departments, access to information, and last but not least culture. 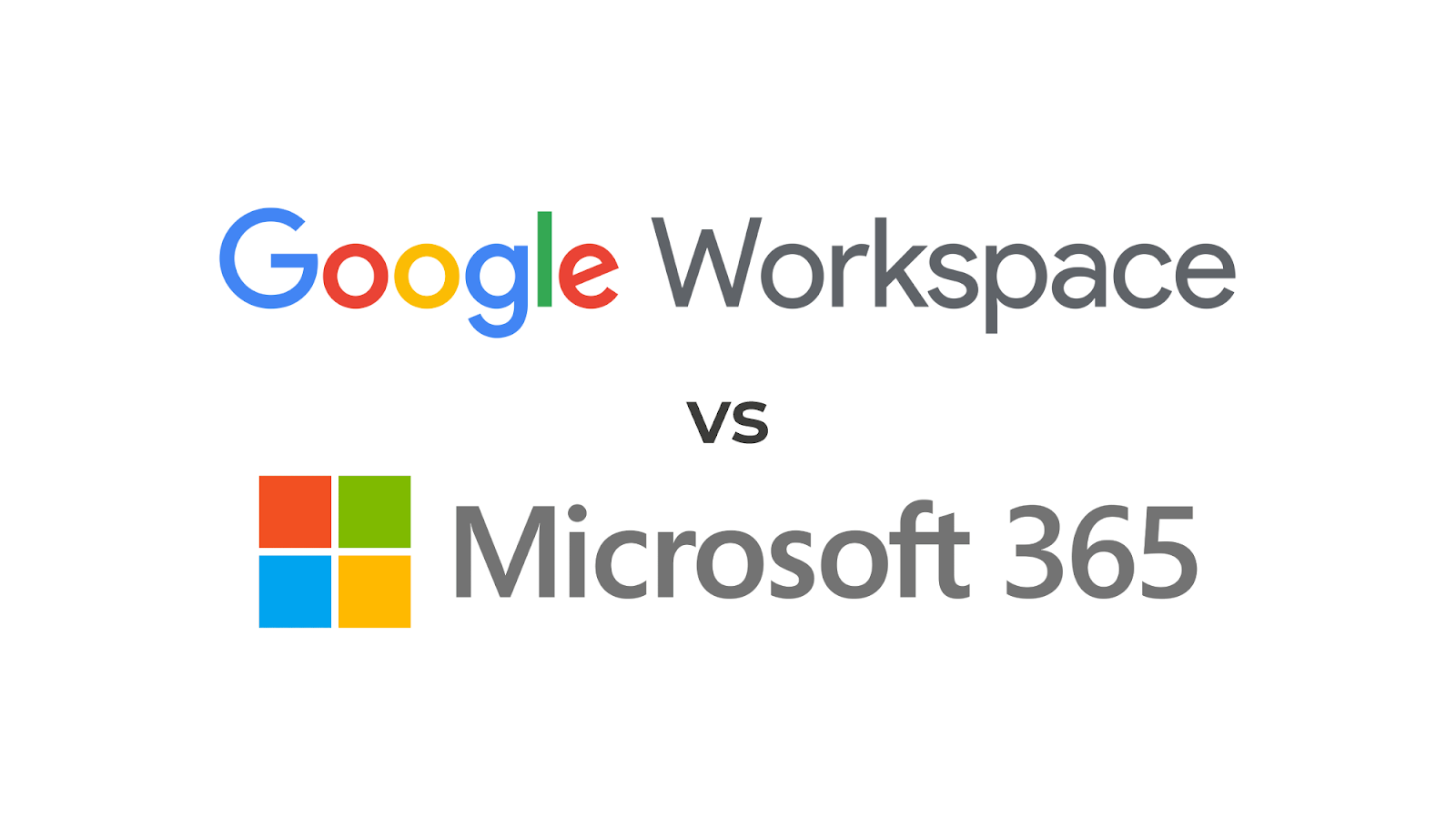 Both groups of companies were asked the same questions about the 5 areas and how either Google Workspace or Microsoft 365 improved them. Let’s discover which one got the most positive results.

The study found that while both softwares improved collaboration, Google Workspace consistently drove bigger impacts. Below are the results.

These wins for Google Workspace against Microsoft 365 add up to create a culture in which people work together more, but also better.

Let’s go over some features that will allow your workers to collaborate more effectively.

When creating a meeting in Google Calendar, you can access a feature that allows all the participants to take notes. Start by clicking on the “Options” button in the bottom right corner. 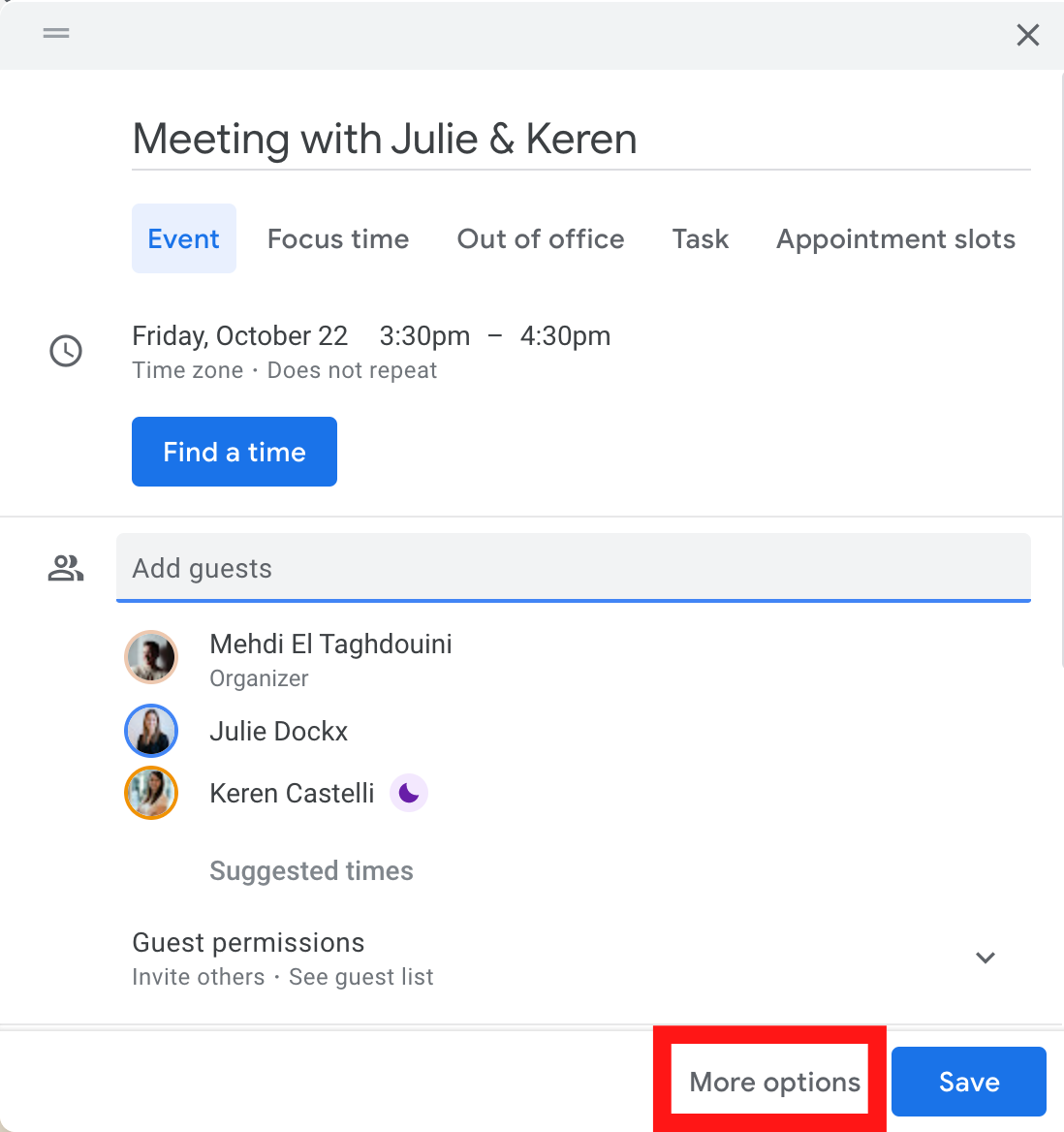 On the next screen, you will see a button that reads “Create meeting notes”. By activating this feature, you will automatically create a Google Docs file that will be shared with all participants of the meeting. 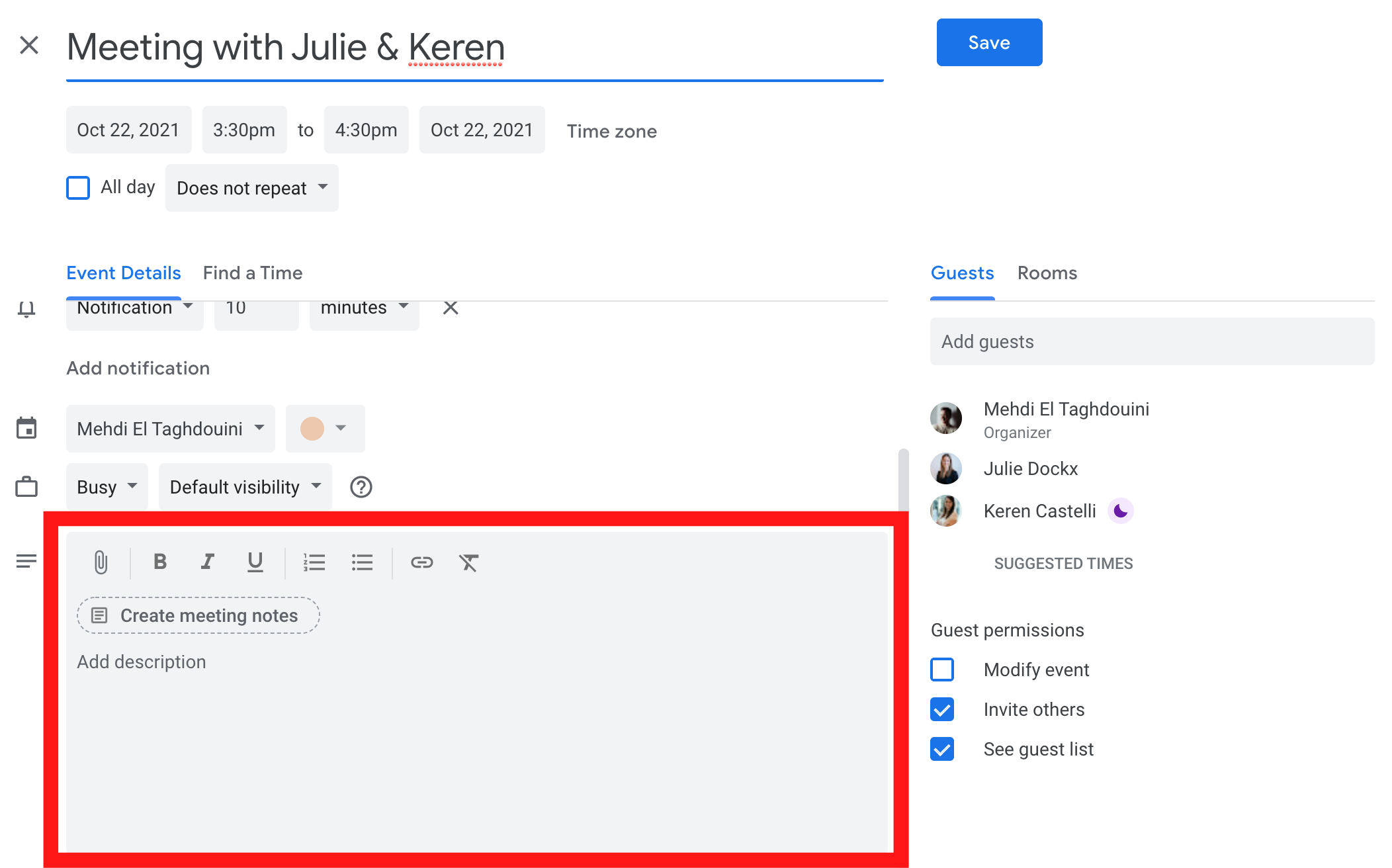 Once the document has been created and filled with meeting notes, you can open it and edit it as you want. You can notify other participants of your edits, ask questions, or get their feedback by tagging them with the “@” symbol. 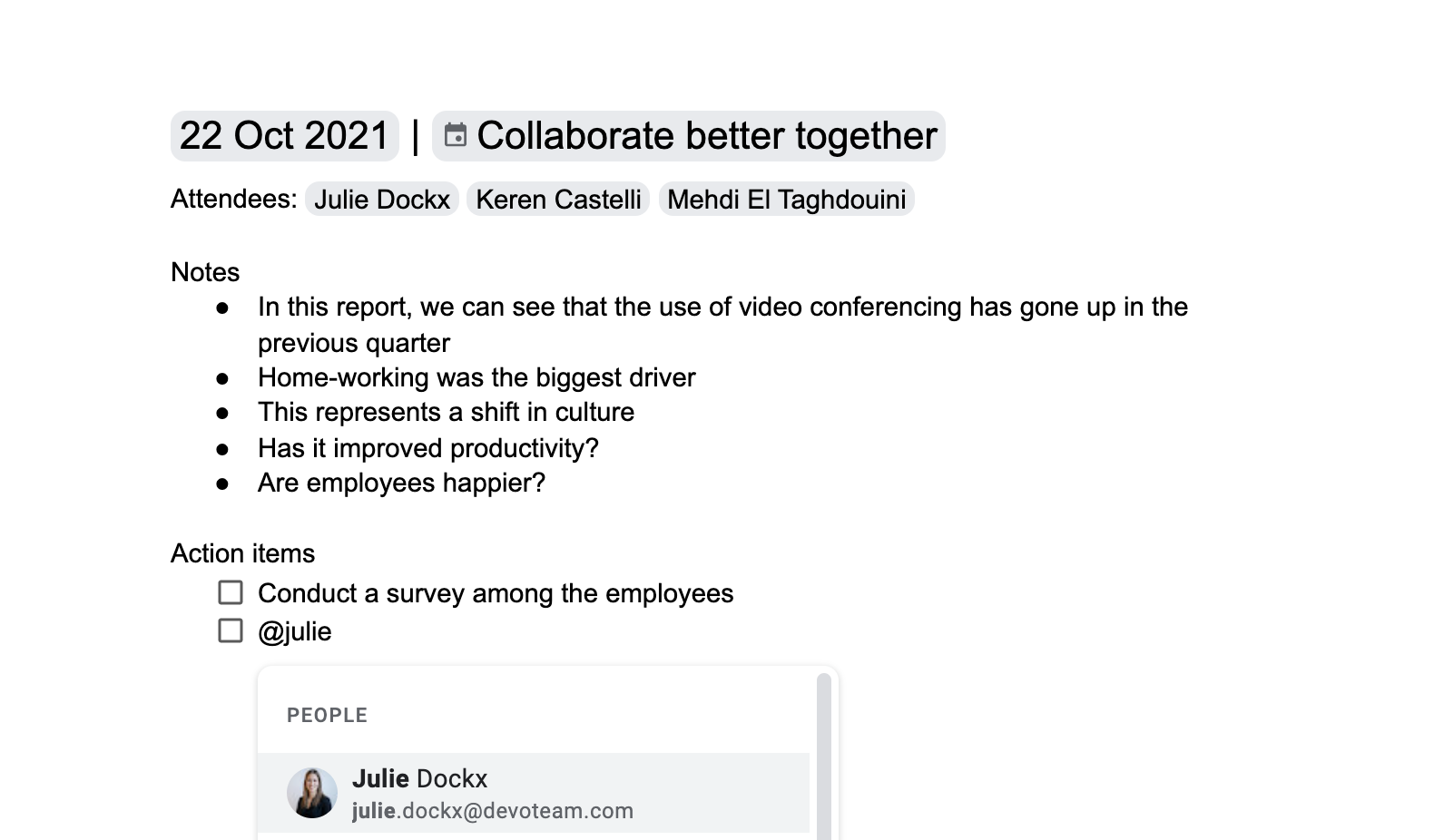 What about communication among employees? Read on to find out.

Think about how the workplace culture has changed over the past couple of years. Remote working has become the norm. Feedback and documents need to flow seamlessly between colleagues, and meetings need to connect team-members wherever they may be.

The productivity software carries the responsibility of facilitating communication between colleagues across time zones and continents. The study found that Google Workspace outperformed Microsoft 365 by a considerable margin in that respect.

In a nutshell, Google Workspace users felt that :

Below are the full results :

What are the communication platforms that are provided in the Google Workspace suite?

Let’s start with Google Chat, a platform where you can send direct messages and have group conversations with your colleagues. You can either use it as a standalone application, or right in Gmail. 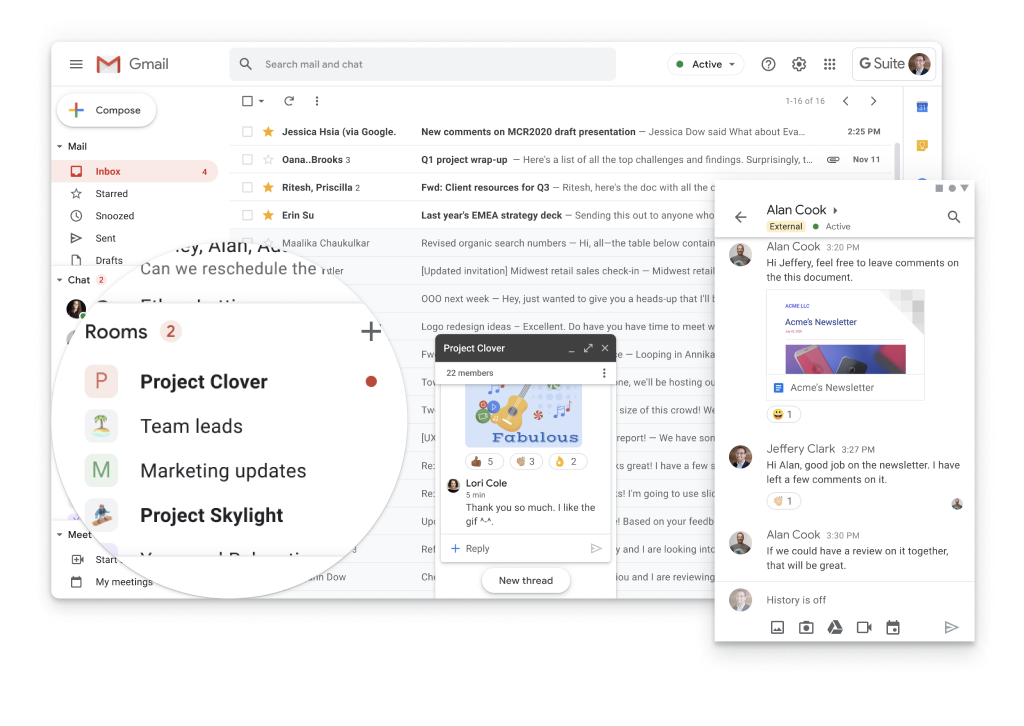 In order to push your communication & collaboration efforts even further, Google recently introduced the “Spaces” feature to Google Chat. A Space has all the collaborative features you need, such as:

As for the use of video conferencing, both sets of companies were asked the following questions :

51% of Google Workspace users responded “video” ; the same answer was given by just 32% of Microsoft 365 users. 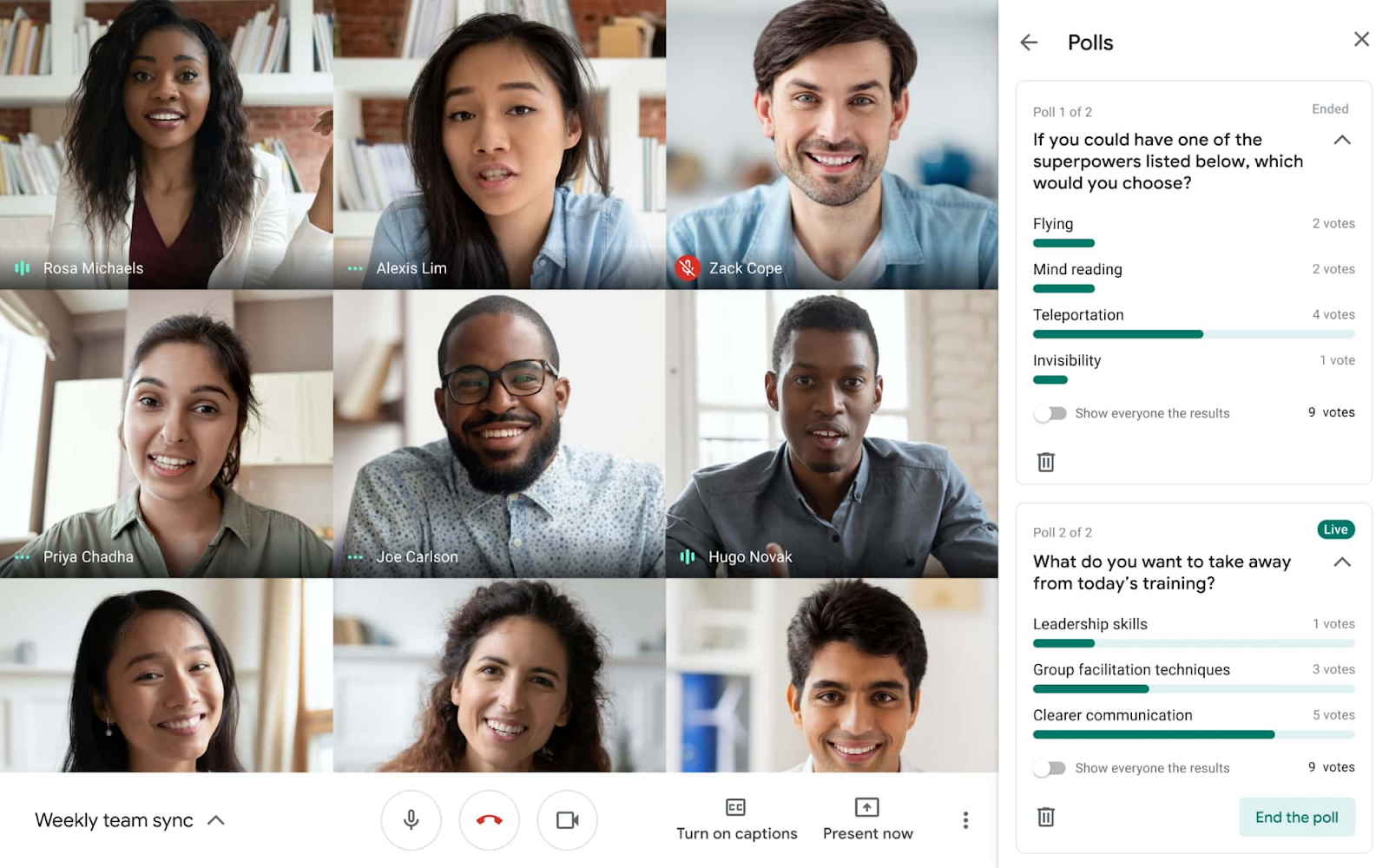 Does an improvement in collaboration and communication among employees translate into satisfaction towards IT departments? The study answers this question in the next paragraph.

Satisfaction with IT departments

Your IT department matters just as much as your end users. Here again, Google Workspace proved to be a better fit for most organisations than Microsoft 365.

In fact, the majority of IT departments of the surveyed companies declared that moving their people to Google Workspace was easier than Microsoft 365.

To the question “How long did it take your team to feel comfortable using Google Workspace/Microsoft 365?”, companies responded with the following :

As you can see, initiating change and migrating your workforce to Google Workspace is likely to be easier and faster than Microsoft 365.

Now, let’s have a look at the way users of both softwares can access information.

Companies generate massive amounts of data and information. Without proper tools to transfer that knowledge, it can get stuck with one individual, or one team, and never finds its way to the people who really need it.

The study found that Google Workspace, more effectively than Microsoft 365, breaks through these barriers.

As for accessing information from mobile devices, the ability to work anywhere at any time has a strong impact on job satisfaction. According to a report from The Economist’s Intelligence Unit, access and usage of mobile technologies make employees more productive, creative, satisfied and loyal.

The data from the study shows that Google Workspace delivers a more seamless and robust mobile working experience than Microsoft 365.

In fact, 76% of Google Workspace users work on mobile often, compared to 61% of Microsoft 365 users.

Last but not least, the fact that Google Workspace is natively cloud-based makes it accessible from a browser wherever you may be and from any device, unlike Microsoft 365. 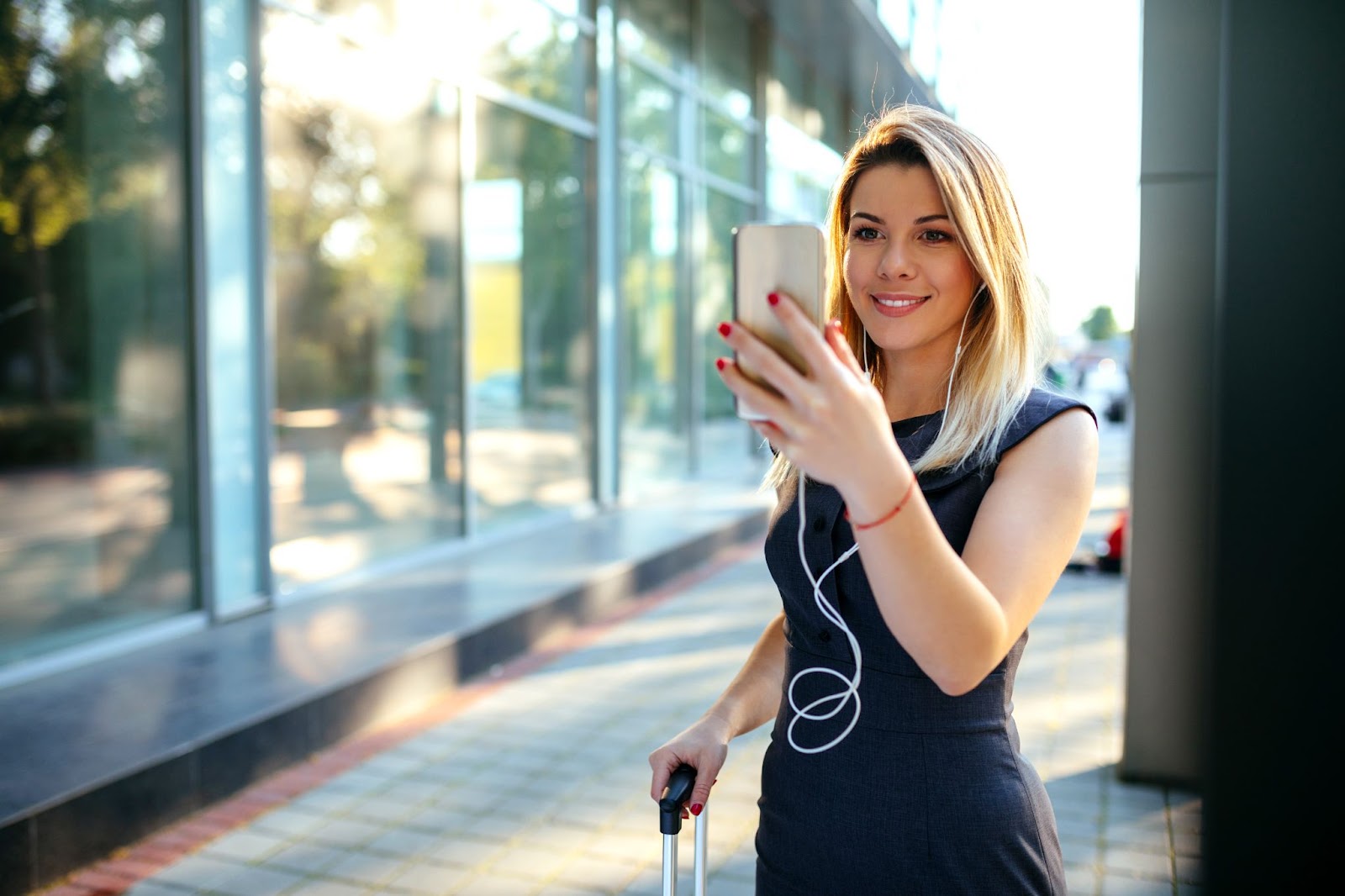 As you can see so far, Google Workspace gets more thumbs up than Microsoft 365 by companies who use either one of these softwares, but how does it translate into an improved company culture?

Technology is a critical component of company culture. It can help create a flat hierarchical structure where communication between people of different levels within the company is facilitated and encouraged.

While technology is unlikely to change the culture of a company on its own, it plays an important role nonetheless. In that regard, Google Workspace users rated their workplaces higher than people in Microsoft 365 organisations.

Here are the reasons why:

The bottom line is that Google Workspace beats Microsoft 365 across the 5 areas companies care about the most.

But does this massive vote of confidence for Google Workspace translate into increased productivity and innovation?

The study found out that companies that responded in favor of Google Workspace noticed an increase in both metrics.

To sum it up, by going for Google Workspace instead of Microsoft 365, your company could see an increase in

In turn, these increases lead up to a more innovative and productive environment in which your employees can thrive. These parameters can make your company more attractive for talents.

If this article has swayed your preference towards Google Workspace, consider giving us a call. Our experts will get down to work immediately to study your situation and offer you the best possible solution.